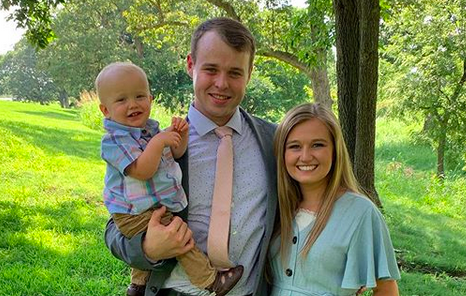 On social media Thursday, Joe and Kendra Duggar shared a new post. The couple has a joint Instagram account. Because of this, their followers aren’t sure who does most of the posting. But, it’s likely that Kendra is the one sharing pictures. That’s what fans seem to think. Several other couples share social media accounts.

In the new post they shared, they included two photos of their kids. Garrett is one year old and Addison is about two months old.

In the pictures, Garrett and Addison are sitting on the couch together. Well, Addison is leaning up against the couch and her big brother. Both of the kids have adorable smiles on their faces.

While Duggar fans agree that both of the kids look sweet in this picture, the attention is on Addison. She likely started smiling recently, so it’s getting more attention than Garrett smiling. Of course, fans think Garrett still looks cute.

In the caption, one of the proud parents writes, “These two” and adds a heart eye emoji.

Because of the family’s TV shows, they always get a lot of attention when they post on social media. They have a large audience of people who want to see their kids’ adorable moments.

On this post, just eight hours after it was shared, it received 33,000 likes and 275 comments. Joe and Kendra have nearly 500,000 followers on social media. It’s safe to say that Duggar fans like what the couple has to post.

In the comments section of their recent post, fans are saying how adorable the two kids are together. Of course, seeing little Addison’s smile is a big deal.

The rest of the sweet comments about the kids came from the family’s fans. Maybe other members of the family will comment on the post later as they often do.

It’s not often that Joe and Kendra post on social media. They have been sharing more photos lately, which is a treat for their followers. Social media is a good way for fans to keep up with the family, even though TLC isn’t airing new episodes of Counting On at the moment.

What do you think of these new pictures? Do you love seeing Garrett and Addison? Leave a comment below.