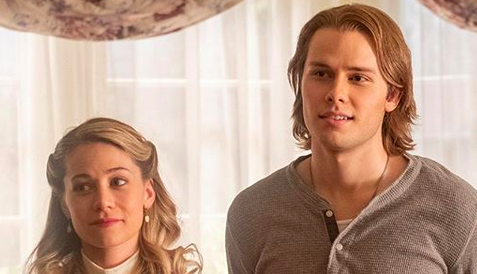 There are spoilers from This Is Us Season 4, Episode 12: “Hell of a Week: Part Two” in this article.

On Tuesday, January 28, the new episode of This Is Us was all about Kevin Pearson (Justin Hartley). Episode 11 was about Randall Pearson (Sterling K. Brown). Episode 13, which doesn’t air on Tuesday, February 4, will likely feature Kate Pearson (Chrissy Metz). Right now, the series is focusing on each of Kate’s, Randall’s, and Kevin’s “hell of a week”.

While Kate and Randall are finding their grooves in their own marriages and as parents, Kevin has been left behind. He’s not in a serious relationship, not married, and doesn’t have a child, even though he desperately wants those things. Now that his longtime, off-and-on girlfriend Sophie has returned to the screen, This Is Us fans are eager to see what’s around the corner for the former couple.

In Episode 12, Sophie is engaged to a man named Grant. Unfortunately, Sophie’s mom passes away, which is what reunites Kevin and Sophie. Because of Sophie and Kevin’s history, it only makes sense to Sophie that Kevin is at the funeral.

Then, it hits her that her mother, Claire, never really got to know Grant. Fans of the show will recall that Kevin and Sophie got married very young. So, Claire was familiar with Kevin and actually really liked him.

Will his first love be his last love? #ThisIsUs

Who was Kevin in bed with in Episode 11?

One of the biggest questions at the end of Episode 11 had to do with who Kevin was in bed with. This Is Us viewers will recall seeing Kevin in bed with an unidentified woman when Randall gave him a call. In Tuesday’s episode, it became obvious that Kevin was actually in bed with Kate’s friend, Madison. When Kevin gets back from Sophie’s mom’s funeral, he promises Kate he’ll spend some time with Baby Jack.

Instead, when Kevin gets to Kate’s house, Madison is there. So, it all becomes pretty clear that he hooks up with her. This comes as a bit of a shock to This Is Us fans. Creator Dan Fogelman previously said Madison and Kevin wouldn’t be getting together.

Just FYI: Madison is my wife in real life @CaitwithaC

And if you thought I was letting her sleep with @justinhartley on national television you're nuts. #ThisIsUs

At the end of Season 3, the flash forward gave fans an obvious clue that Kevin has a child. Who the child’s mother is is the big question though. We also saw that Kevin’s fiance, who is still unknown, is pregnant and has morning sickness after Episode 11 takes place.

So, what’s next for Kevin and Sophie on This Is Us?

In Episode 12, the duo bonded over the tragic losses of their parents, since Sophie lost her mom and Kevin lost his dad. The way the two interact gets fans hopeful for a potential relationship.

Of course, the writers of the show aren’t going to give everything away so easily. So, fans will have to wait to see how Kevin and Sophie’s story unfolds.

Because Kevin is not in a serious relationship in Episode 12, it’s possible that he’s having a baby with Sophie. They already have a history, so it seems more likely than him having a baby with a stranger or a one-night-stand. After his hookup with Madison, who knows?

What did you think of Kevin’s episode this week? What do you think is next for Kevin and Sophie? Leave a comment below.