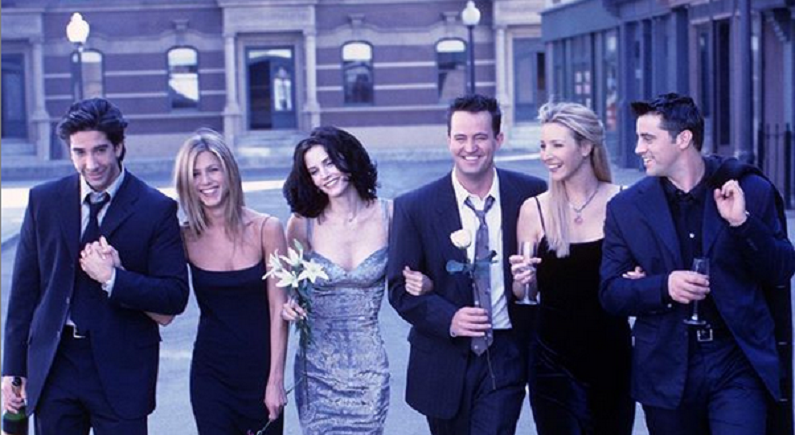 David Schwimmer is finally talking about the criticism surrounding Friends. He defended the show he was part of for 10 years. The hit NBC sitcom has found a new audience among young viewers who may or may not find this brand of comedy fun. It’s also been criticized by millennials who felt that the show was lacking in diversity.

Friends was based in New York City, a city known for its diversity. Unfortunately, that wasn’t well represented series. Friends star David Schwimmer, who played Ross on the show, is lashing back at critics. He also put those reboot rumors to rest.

Even though the show ended 15 years ago, it’s still talked about to this day. Viewers get a glimpse at the lives of Chandler, Monica, Phoebe, Joey, Rachel, and Ross. Since it has 10 seasons under its belt, the show has also gotten its share of criticism. Viewers who used to love the series have trouble enjoying it a new political climate.

The show had issues with both diversity and homophobia. There was also the problem with Ross’ behavior towards Rachel for much of their on-and-off relationship. Schwimmer sat down for an exclusive interview with The Guardian in which he was asked about the criticism. He quickly defended the series even though it was tone-deaf when it came to topics like weight and the LGBTQ community. He claims that the show was still “groundbreaking” for its time.

“I don’t care. The truth is also that show was groundbreaking in its time for the way in which it handled so casually sex, protected sex, gay marriage and relationships,” Schwimmer explained. “The pilot of the show was my character’s wife left him for a woman and there was a gay wedding, of my ex and her wife, that I attended.”

Ross has dated many women on the show. At one point, he dated an Asian woman and in later seasons, a black woman. But fans still feel that the cast lacked in diversity.

“Maybe there should be an all-black Friends or an all-Asian Friends,” Schwimmer added. “But I was well aware of the lack of diversity and I campaigned for years to have Ross date women of color.”

Schwimmer also revealed that the religious representation of siblings Monica and Ross made him happy. The Friends holiday episodes weren’t always centered around Christmas. In one episode, Ross dressed up as the iconic Hannukah armadillo. Schwimmer says he was glad to be on a show that acknowledges the different types of faith.

Rumors have been swirling for years that the sitcom could make its return. Fans are hoping for a reboot or revival of some sort around the show’s 25th anniversary. But the 53-year-old actor revealed that he would only be open to an unscripted special in which the actors talk about their time on the show.

A similar Friends reunion special last aired on NBC back in 2016. Schwimmer expressed little interest in reprising his role of Ross. He also believes that Friends fans aren’t really interested in a reboot.

“I just don’t think it’s possible, given everyone’s different career trajectories,” he stated. “I think everyone feels the same – why mess with what felt like the right way to end the series?”

Schwimmer said he doesn’t care how much money producers throw at him. He would still say no. The actor would only do it if it felt right. However, he and his fellow cast mates have gotten offers, but they haven’t liked what they heard.

Why is this show still so popular?

Friends became popular with the younger generation after it streamed on Netflix. Schwimmer thinks the renewed interest in the series was because the sitcom was created before social media. That’s unheard of these days.

“It was six people who actually sat and talked to each other,” he said.

What are your thoughts on David Schwimmer’s comments on Friends? Do you agree with him? Are you sad to hear that there won’t be a reboot? Sound off below in the comments section.

Kylie Jenner Stresses Fans Out Because Of This
Shania Twain Spills Where Oprah Winfrey Draws The Line
Emma Johnston Misses Her Baby, What Happened?
Is Kim Kardashian Too Famous To Find Love?
‘The View’ Alyssa Makes Uneasy Remark About Sunny’s Teen Son