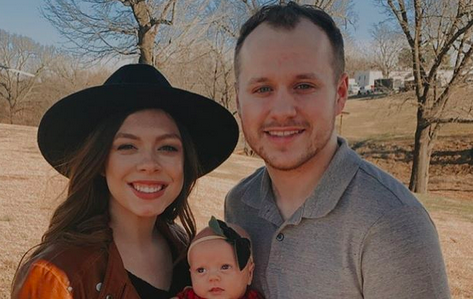 Josiah and Lauren Duggar are loving life as parents! They had their first daughter, Bella Milagro, in November. Now, the little one is two months old. They had a mini photo shoot in their yard and shared the pictures with their followers.

The pictures they shared on their joint Instagram account feature proud mama Lauren holding her baby girl. In the pictures, Lauren is wearing a gray sweater and Bella is wearing a pink sleeper. As usual, Bella is also wearing a bow on her head. They referred to Bella as their “little ray of sunshine”.

Some fans have recently had a problem with the Duggar babies always wearing headbands. In a recent photo, it looked like Joe and Kendra’s baby, Addison, couldn’t see or breathe because the bow was slipping down her face. So far, most of the comments on the photo are positive.

Look who’s 2 months old!💕 . .These days our little ray of sunshine is all smiles and her little coo’s just melts our hearts! .#bellamilagro

While the focus was meant to be on the Duggar baby, many fans are obsessed with Lauren’s cute hairstyle. Some of them said that she should give hair tutorials. They think that the new mom looks great, especially since Bella is only two months old. She bounced back quickly.

Over the past couple months, the couple has been updating their Instagram page with pictures of Bella. Duggar fans love to see pictures of the sweet little girl.

In addition to their post on their feed, the couple shared pictures on their story too. Most of them were duplicates of the ones featured on their feed, but there was one different one. In the picture on their story, Lauren is kissing Bella’s cheek. Fans agree that it’s an adorable picture of the new mom and her little one. 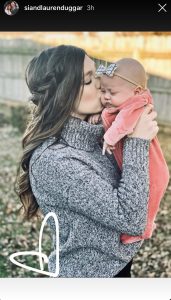 Prior to Lauren getting pregnant with Bella, she had an early miscarriage. This was very tragic for both Josiah and Lauren to go through. They named the baby Asa. They used the miscarriage to raise awareness for pregnancy and infant loss.

When Lauren got pregnant with Bella, they referred to her as their “rainbow baby”. This is a term that’s commonly used to describe a baby born after a loss. She’s their rainbow after their storm, or their miscarriage. Since she was born, they have talked about how special each moment is with her.

Look who’s here! 💕 Bella Milagro Duggar was born November 8th, 2019 at 4:24 pm, weighing 6lbs 5oz and 18.5 inches long. Our hearts are so full! We are so thankful for God blessings us with such a healthy baby girl! . [email protected] .#bellamilagro #ourlittlemiracle #rainbowbaby

When Lauren was pregnant with Bella, they revealed that they hope to have a large family. They named their lost baby, Asa, and Bella in alphabetical order, which they plan to continue.

What do you think of the new pictures of Bella? Leave a comment below.

Follow along with TV Shows Ace for the latest updates on the Duggar family.