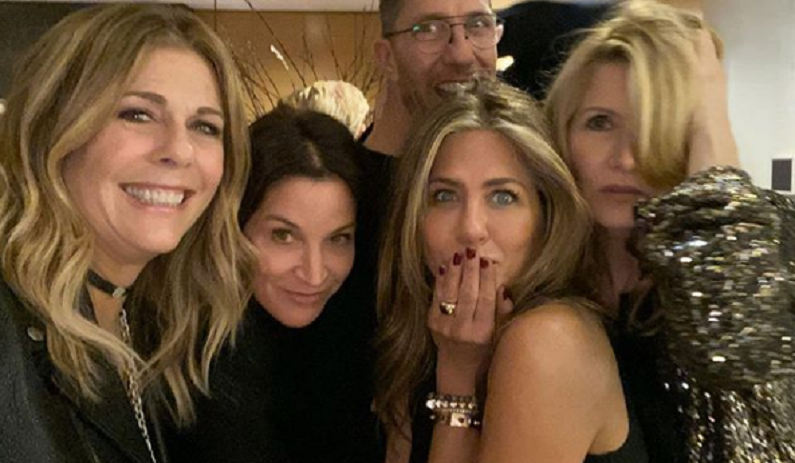 Jennifer Aniston has made a name for herself since her Friends days. She isn’t just America’s Sweetheart or Brad Pitt’s ex-wife. But that hasn’t stopped the media from bringing him up. A source closed to the actress revealed she’s “excited” about the Golden Globes. This comes after it’s been reported that the pair have been talking a lot lately.

But the real reason she’s probably “excited” about the Golden Globes is because she’s nominated for her role in the Apple TV+ series. She’s up for an award for Best Actress in a Television Series on The Morning Show. The 50-year-old has been ready and waiting for this night, even if she runs into her ex.

Actress is looking forward to the Golden Globes

As reported via People, Aniston is “excited” about tonight. She got her hair and tan ready. She feels that her new series could become the night’s big winner.

“Jen is very excited about the Golden Globes. She feels rested and has a great tan,” the source said. “Jen would love for The Morning Show to be a winner. She is very proud of the show and has loved working on it.”

Aniston stars in and produces the series alongside costar and friend Reese Witherspoon, who’s received three nominations. Since the final episode of the drama dropped last month, both women have commemorated the moment in a series of Instagram posts. She told People that working with Witherspoon on the series “just fell into place because she’s so damn good and there was sort of an unspoken language.”

Brad Pitt and Jennifer Aniston will sit “close to each other”

The two actors will be attending the awards ceremony on Sunday night, and they’re expected to sit next to each other. Like Aniston, Pitt is also nominated. He received a nod for Best Actor in a Supporting Role in any Motion Picture for his role on Once Upon a Time…in Hollywood. It’s likely that they’ll become two of the most talked about celebs of the night.

Both of them will also be seated up front at the ceremony, according to Hollywood Life, as reported via PopCulture.tv. The outlet’s sources revealed that it won’t be so awkward since they’re good friends.

“They are friends and will likely chat during a commercial or something,” one source said. “They are not worrying about being in the same room or being seated near each other. It is really a non-issue. They are both looking forward to a fun night.”

Another report has revealed that Jennifer Aniston and Brad Pitt have been “flirtatious at times.” An insider told Us Weekly that they’ve been talking a lot lately. They decided to put their differences aside and find themselves on better terms.

“Brad and Jen have a wonderful connection,” the source said. “They dig each other’s sense of humor and have an infectious energy when they’re together, but they insist things are purely platonic and nothing more than that.”

There is no bad blood between the two A-list celebrities, who were married from 2000 to 2005. Even though it took Aniston a long time to get over Pitt, she finally healed. Their relationship also took some mending, and they’re aware of the fans who want them back together. While their connection is far from romantic, it’s good to know that these two are on better terms.

As TV Shows Ace reported, Aniston is fine being single, but she wouldn’t mind meeting someone new. Maybe that could happen tonight since there are plenty of single and eligible men in Hollywood.

The 77th annual Golden Globe Awards is live on Sunday, Jan. 5 at 8 p.m. ET. What are your thoughts on Jennifer Aniston and Brad Pitt attending tonight’s event? Sound off below in the comments section.