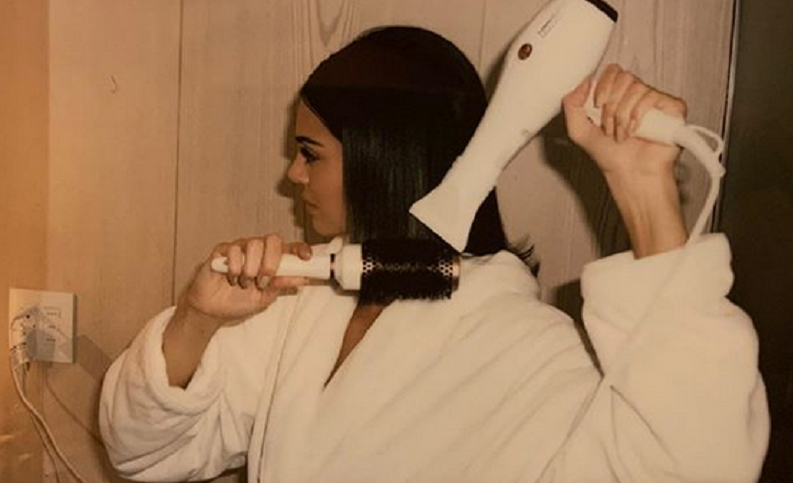 Kendall Jenner has opened up about her acne struggles in the past. She admits that her skin isn’t perfect. She credits Proactiv for her clear skin, but fans are still skeptical.

Now her dermatologist is sharing some of her secrets. However, there is no mention of her using Proactiv. YouTube star Summer McKeen also struggles with acne. She decided to take a trip to Los Angeles to visit with Dr. Simon Ourian, who is also Kendall Jenner’s dermatologist. She wanted his advice for acne-prone skin.

The holidays are starting early this year with @moon. The new Candy Cane Whitening Pen just launched and it's the perfect little gift! #moon_partner

In the video, McKeen revealed that she uses Accutane. Dr. Ourian examined her face and said that laser treatment caused her acne. However, acne is a skin condition that occurs when the hair follicles are blocked by bacteria, dead skin, or oil, according to Healthline. It leads to blackheads, whiteheads, and other breakouts.

Dr. Ourian also advised McKeen to follow this advice to get acne-free skin:

He also suggests avoiding dairy. Evidence-based studies have shown that dairy can cause acne flareups. But, Dr. Ourian’s advice is terrible since heavy oils can clog the skin and cause giant cysts. And moisturizer and sunscreen is important, especially on acne-prone skin.

Last summer, Kendall Jenner shared some of her skincare tips. During her interview with Elle, the 22-year-old admitted that she was a “hypochondriac” while growing up in the public eye, but it wasn’t enough to keep her acne away. She’s gotten better at it since, though.

Birth control used to keep her acne under control. If she got a breakout, she would just show it the world. Her newfound confidence forced her to stop using birth control in 2018 and she hasn’t looked back since. But as her modeling career took off, her acne returned.

“I think it had a lot to do with my stress level­—and it was really high—and I was really overwhelmed,” Jenner said. “I don’t think I was eating right. I had never had acne that bad, even when I was younger.”

That was when Jenner tried Proactiv. In January 2019, she became the face of the skincare brand. Kris Jenner called her video “brave” and “vulnerable.” She claimed to use the products on herself for about a year until she started to see results. The model also revealed that she’s a huge fan of facials and microneedling to reduce the scarring.

Supermodel washes her face for only 10 seconds

She was also slammed for her “simple, straightforward” skincare routine that’s ineffective for acne-prone skin. She received backlash for posting a video in which she shows herself washing her face for only 10 seconds. It’s similar to the face-washing video Kylie posted for her own skincare routine. But Jenner doesn’t feel there’s a time limit for washing your skin.

“I didn’t know there was a time limit. That’s actually new information for me,” she said with a laugh. “But, no, I just wash my face until I feel clean. Sometimes I’ll use my cleanser, rinse my face off, and if I feel like I’m still not clean enough, I’ll just do the cleanser again just to get any extras off my face.”

Does Kendall Jenner really use Proactiv?

When Proactiv claimed that Jenner’s big announcement was more than a paid partnership, fans were still skeptical. Many took to social media to mock her overly dramatic video. Many were doubtful that the model used a skincare line that’s so affordable. She has access to the best cosmetologists and dermatologists that Hollywood has to offer.

While Jenner has admitted her acne struggles before, she’s never once mentioned Proactiv. She previously worked with dermatologist Christie Kidd. In a 2015 blog post on her eponymous app, she revealed that she worked with the “incredible dermatologist” and received Laser Genesis Treatments, which made her “acne-free for about three years now,” as reported via W Magazine.

What are your thoughts on Kendall Jenner’s skincare regimen? Sound off below in the comments section. Don’t forget to check back with TV Shows Ace on the latest news about the Kardashian family.