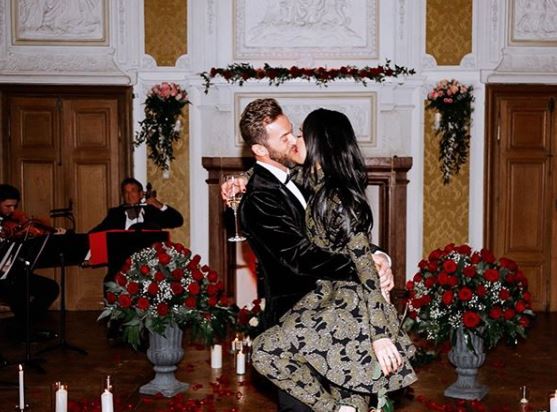 Dancing With the Stars has helped to put another couple together. It turns out that Nikki Bella and Artem Chigvintsev are engaged. This couple got engaged back in November, but just now revealed the news. Nikki went to her Instagram to share with fans today.

Bella went to her Instagram today to share the news with fans. You can check out her post below. It shows off her ring and what few details they are giving fans about the engagement so far.

Excited for 2020 and the next decade with you @theartemc ❤️ I said yes in France in November! We have been trying to keep it a secret but really wanted to share our excitement for the New Year!

They got engaged back in November. She didn’t share the news at first though. Nikki admitted they had been trying to keep quiet. They decided to let the fans know about it for the new year. She also shared a picture of her gorgeous ring.

Hopefully, this was all filmed for Total Bellas. The fans would love to see the proposal go down on the show. They were in France when he asked, but the cameras do follow Nikki around when it is time to film. Nikki is very close to her family so hopefully, they got to see him ask the question as well.

Nikki and Artem met while she was on DWTS. He was her partner and they had amazing chemistry. At the time, she was with someone else, though. Nikk’s first engagement didn’t work out and once she was single again she connected with Artem again. Things worked out and these two have been together since.

Don’t miss watching Dancing With the Stars when it returns for another season later in 2020. It won’t be airing until the fall and no word on if Artem will be back as a pro or not.