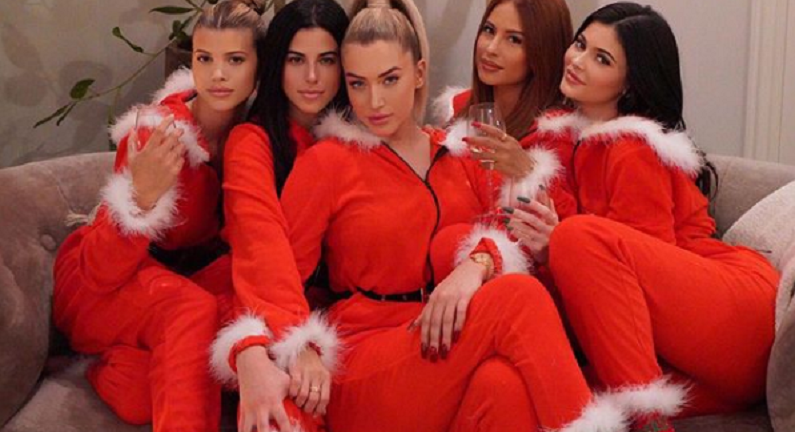 Kylie Jenner has a close-knit group of girlfriends. She often posts about them on social media. One of her main besties includes Anastasia “Stassie” Karanikolaou. Their friendship isn’t always perfect though. She expressed disappointment in her friend on social media.

The two Instagram beauties were seen ringing in the new year together. Everyone knows that being mad at your friend can quickly ruin the night. It made it difficult for them to get along throughout the entire night. However, their little spat didn’t prevent them from closing out 2019.

Kylie Jenner matches with BFF despite being “mad at each other”

Kylie Jenner and her BFF Anstasia “Stassie” Karanikolaou wanted to put their differences aside for a night of partying and taking Instagram photos. The two have shared various matching outfits for most of 2019. They decided to match one more time. In her latest Instagram post, the 22-year-old women are seen facing each other and grabbing each other’s derrieres while wearing matching curve-hugging dresses, as reported via People.

They both accessorized their looks with matching vintage Prada purses and strappy sandals. The two beauties also styled their hair into top knot buns. In the caption, the beauty mogul admitted that they were “match each other rn but this pic looks good with my friend.” Their fight didn’t last too long since Karanikolaou wrote “i love you my twin” underneath Jenner’s Instagram post.

Fans noticed that the post was meant to be sarcastic. The Kylie Cosmetics entrepreneur laughed and said “i love you” back. Back in December, the two were seen twinning again in colorful leather trench coats with fur trim.

The one girl who’s no longer in the reality star’s group of friends is Jordyn Woods. Even though they were close friends for several years, their friendship quickly ended during Valentine’s Day weekend in 2019. Woods was accused of kissing Khloe Kardashian’s ex-boyfriend, Tristan Thompson. Out of respect for her sister, Kylie Jenner ended their friendship.

As TV Shows Ace reported, she also broke up with rapper Travis Scott around the same time. The two have been seen flirting on Instagram and spending time with each other ever since their split. An inside source told Hollywood Life that the starlet was worried that Scott cheated on her with Woods, but he denied the allegations.

While Scott and Woods haven’t had an online interaction, a fan decided to stir up some drama, as reported by Showbiz CheatSheet. A Twitter user who goes by the name @Trvisxxxxxxxx commented with the eyeball emoji on one of Woods’ old photos. But Scott’s real Twitter handle is @TrvisXX. Fans quickly noticed that the post was a hoax.

Both women have been living their lives separately. The Keeping Up With the Kardashians star has formed a stronger bond with Karanikolaou since removing Woods from her life.

What are your thoughts on Kylie Jenner’s friendship with Stassie Karanikolaou? Sound off below in the comments section. And don’t forget to check back with TV Shows Ace on the latest news about the Kardashians.