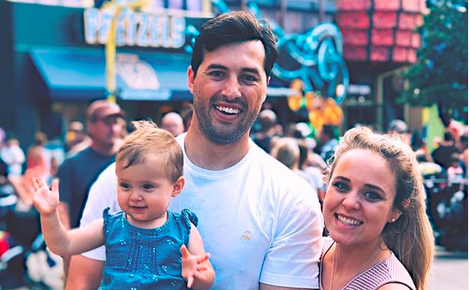 Duggar fans are waiting for some kind of news from the Duggar family. It’s been a while since there has been an announcement of a courtship or a new baby. John and Abbie Duggar are expecting their first baby in January. After she arrives, there will be no pregnant women in the family. Of course, there’s a chance that someone is hiding a pregnancy for now.

Since Thanksgiving, fans have started to think that Jinger Vuolo is expecting. She and her husband, Jeremy, have a one-year-old daughter, Felicity. Fans think that it’s about time that the couple has another baby.

When they are ready to announce a pregnancy, they will likely make it very clear. Both Jinger and Jeremy use social media frequently and keep fans updated on their lives. They recently moved to Los Angeles, California and made sure fans knew about the big move.

Because Jeremy and Jinger are in the spotlight as a part of the Duggar family, they are the center of many rumors. So far, any rumors about Jinger being pregnant have not been confirmed nor denied. The couple chooses to stay silent. Plus, there are so many comments about Jinger’s potential pregnancy that it would be too difficult to keep up. Fans think they might be ignoring the comments to stop others from commenting about the rumors.

On Christmas Day, Jeremy shared a picture of himself, Jinger, and Felicity. They spent their Christmas at their home in Los Angeles. Though the Duggar family didn’t make it out to visit for the holiday, Jeremy’s family spent some time there.

A Duggar fan commented and asked, “Are you expecting?” It seems that the comment was directed at Jinger, but the fan commented on Jeremy’s post, not Jinger’s. So, Jeremy chose to answer the question himself. In response, Jeremy wrote, “I’m not, but now I know I need to lay off the Christmas cookies.” He added an emoji with a confused face.

Those comments have since been deleted. Other fans began defending the couple, saying, “Jinger, you look fantastic! No need to lay off the Christmas cookies. Pay no attention to comments like that.”

Perhaps Jeremy has had enough of the pregnancy rumors and questions. Or, maybe he just wanted to have a good time and make a little joke.

Whether Jinger is expecting or not, fans will find out soon enough. In the past, they have mentioned that they want to have more children. But, they did not specify when that will happen. They might be getting used to Los Angeles before expanding their family. Or, maybe they want to space their children out a little bit more than the Duggar family did with their kids.