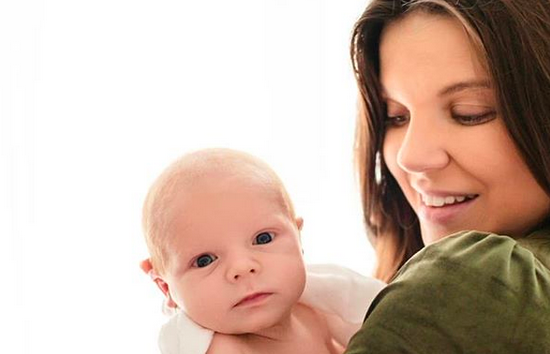 Amy King is a cousin of the Duggar kids. Her mom, Deanna, and Jim Bob are siblings. Their mom, Grandma Mary Duggar, unexpectedly passed away earlier this year. This was a hard loss for the entire family. It was especially hard on Amy because she was so close with her grandmother.

On Sunday evening, Amy shared a new picture of her baby, Daxton. In the picture, Daxton is wearing Christmas pajamas. Beside him, Amy has placed a letterboard. On the board, she wrote, “Tap once to grow hair”.

In the picture, it’s easy to see that Daxton barely has any hair. Amy writes, “💚 It would be a Christmas miracle!” It sounds like the family is looking forward to seeing what his hair looks like. Based on Amy’s post, it doesn’t seem likely that he’ll be getting any more hair anytime soon.

Because it’s Christmastime, Duggar fans are looking forward to more Christmas posts from the rest of the family. So far, several of the family members have been posting about their Christmas festivities.

❤💚 It would be a Christmas miracle!

One fan wrote about when she was a baby and didn’t have hair, “At least he’s a boy 💙 My mom said she got so frustrated when I was a baby. Even though she had me in pink, I had a little bit of light blonde fuzz on my head and people would tell her what a cute little boy she had! She started rolling a piece of Scotch tape on a bow and putting it on my head!! I’m over 60 and laugh when I think about this, especially since my mom passed away❤️”.

Other fans said that they think Daxton is adorable. Someone said, “God gave you a handsome little boy. 💙” They also noticed that Daxton’s hair looks reddish. Duggar fans seem to think that Daxton is going to have red hair when it finally comes in more fully. Someone said, “Do I see a little ginger glow to his cute little head?!?🧡”

What do you think of this festive picture of Daxton? Do you follow Amy on social media? How about the rest of the family? Leave a comment below.