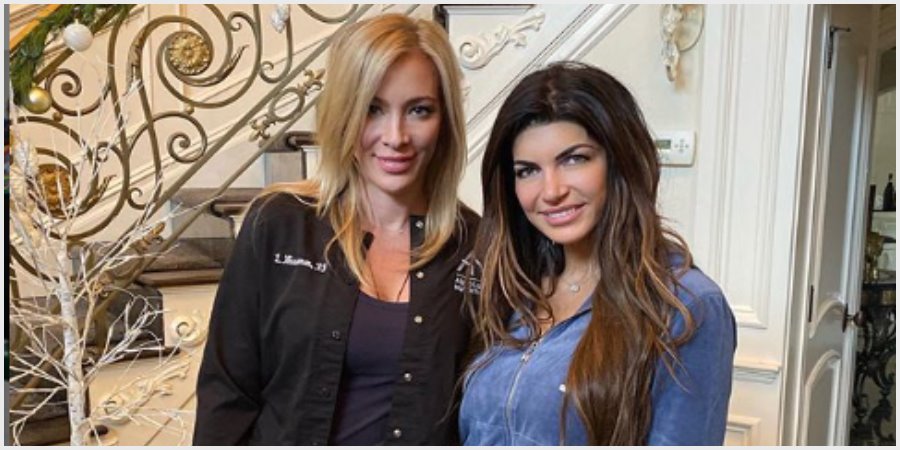 It seems a hatchet can be buried when there’s work to be done. Teresa Giudice was recently spotted in the same room with Caroline Manzo. The two along with Dina Manzo were on the first season of RHONJ and had a fairly public falling out.

According to US Weekly, Giudice and Manzo are at a table full of food and flowers. The video was of a playback monitor that showed them sitting together in red dresses. A fan posted the video to their social media. Everything was red from the curtains to the chandelier. The women were talking between filming and Manzo smiled. This is surprising because very recently Teresa said some not nice things about Caroline.

What Did Teresa Giudice Say About Caroline Manzo?

Teresa Giudice and her husband had an interview with Andy Cohen. It addressed Joe Giudice’s deportation and their relationship. The accusations she made against Manzo were pretty serious ones. She said Carolina Manzo was responsible for both her and her husband going to jail. Though she didn’t come right out and say those words, the insinuation was clear.

She said, “it’s just so sad, I guess, because she’s lived that crooked life. I’ve never lived that crooked life and I guess she has and who she comes from, and where she came from. … How could she predict that we were headed for legal trouble?” Teresa voiced she’d asked herself if Caroline was a rat. When asked if Caroline turned her in, she said, “maybe she called the feds. You never know. Why would she predict those words?”

Hey you know I've been experimenting with the massage set from @pranamat . I think this really might help you too. Wasn't convinced at first – looked painful and tbh the first couple of minutes felt a bit too intense. But that tingle is now what I look forward to every evening 😂 massage has become a fixture in my chaotic life. It anchors me and makes me feel human again. My back had been a problem for years and this is the only thing I can 100% depend on to sort it out. I have had so many messages asking if I truly stand by this product – totally, absolutely – you have to feel it to understand it 😘

The Relationship Between The Two Moving Forward

Teresa Giudice shared a picture on Instagram with the caption, “so happy to see both Cali girls. Miss them both so much, love you both.” The photo was of her with Dina Manzo. Caroline Manzo responded to her accusations of being a rat by laughing them off. Teresa once again said she wasn’t a friend when on WWHL with Andy Cohen in November.

She said, “we did have great times and shame on her for the way it ended up. She’s the one who went against me, I didn’t go against her.”

Caroline had said there had been five and a half years between the last time they talked. Whatever this project is, it’s gotten them to forget their feud or put it aside for the sake of whatever they’re filming together. Fans will wait to see if it lasts.

‘ABP’ Gabe Brown Admits Why He Wants His Home Built So Fast
Whitney Bates Shares Emotional First After Father’s Death
Hallmark’s ‘The Gift Of Peace’ Is Faith-Based Dayspring Movie
How Is Chloe Chrisley Coping With Losing Todd & Julie?
Kendall Long Is Engaged Ahead Of Big Move