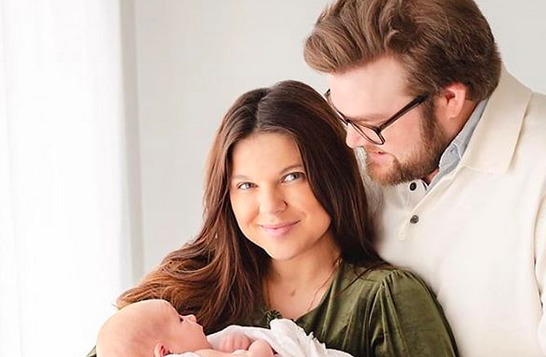 Amy King is a cousin of the Duggar kids. Her mom, Deanna Duggar, and Jim Bob Duggar are siblings. Over the years, Amy has appeared on the family’s TLC shows, including 19 Kids & Counting.

Amy and Dillon King have been married since September 2015. Now, she has recently become a mother. She gave birth to her first son, Daxton Ryan, in October of this year.

Since she became a mom, she has been documenting her son’s life. She has even made an Instagram account for the little guy, because they, “wanted to grab it before it wasn’t available for when he’s older!” On her own social media page, she is very open about motherhood and shares about the ups and downs. In response, Duggar fans give her a lot of love and support. They appreciate how honest the mom is.

2 weeks earthside this week!! We now have more love than we could have ever dreamed of! ——- I remember taking the 2nd picture as we were setting up his little nursery! And now I just can't believe as I write this I'm feeding you, you're in my arms and your grabbing my hand!! Bear rug: @claraloocreations Boho rug : @rugs_usa Moses basket : @plumandsparrow Outfit: @gigiandmax Wooden name sign @pacidoodle

She also revealed that her mom is a huge help! Amy wrote, “My mom comes and takes care of Daxton for 3 hours in the mornin! She comes at 8am opens my bedroom door with a big tall glass of water, and my hand held pump! She takes Daxton while I work on my freezer stash! I wash my face, brush my teeth and then I eat oatmeal and hop back into bed!! Without those extra 3 hours of sleep I don’t think that I could function the rest of the day! With Dill opening his restaurant soon and managing 3130 he needs his rest! So I handle the night shift! Dax wakes up every 2-3 hours right now. Soo it’s hard adjusting to this new routine! It’s those early morning feeding sessions at 4:30am.. that I think help is on the way! Keep your eyes open Amy!! Sleep is in your near future! Lol!”

Since his arrival, fans have been eager to see pictures of Daxton’s nursery. Amy is fashionable, and she even runs her own clothing boutique. Fans were expecting a gorgeous nursery.

On Friday, she shared a series of pictures of Daxton’s nursery. In the caption, Amy shared where she had purchased each of the items in the space. Often, fans comment and ask where celebrities bought their furniture, clothing, and more. Amy decided to save herself the trouble of responding to countless comments.

In addition, Amy talked about the style of Daxton’s room. She writes, “Daxton’s Nursery! I went with a woodland rustic theme.. the wood behind the big letter is from my Gma’s fence that was being torn down! ….the basket is filled with books from my childhood and even my first Bible! It’s my favorite room in our house!”

So far, Duggar fans are loving what she’s done to the nursery. They are leaving lots of sweet comments about the decorations. They especially like the wood from her grandma’s fence. As fans know, Amy was very close to Grandma Duggar. She passed away earlier this year, so it has been a difficult year for the whole family. Having a sentimental decoration is important to Amy.

Daxton's Nursery! ▪︎▪︎▪︎▪︎ I went with a woodland rustic theme.. the wood behind the big letter is from my Gma's fence that was being torn down! ….the basket is filled with books from my childhood and even my first Bible! It's my favorite room in our house! Tagging everything here! ▪︎ -Crib & rocker chair @milliondollarbabyclassic ▪︎ Bear rug @claraloocreations ▪︎ Aztec fringe Rug @rugs_usa ▪︎ Alphabet letters @maiiberlin ▪︎ Boho Tapestry @ whiskerwoven ▪︎ Mobile @hellobirdiebirdie ▪︎ Changing Tray @lellobabyshop Thanks to my sista for coming over and spending time with us! @lorenbullardphotography

What do you think of Daxton’s nursery? Do you like the decorations that Amy chose? Leave a comment below.