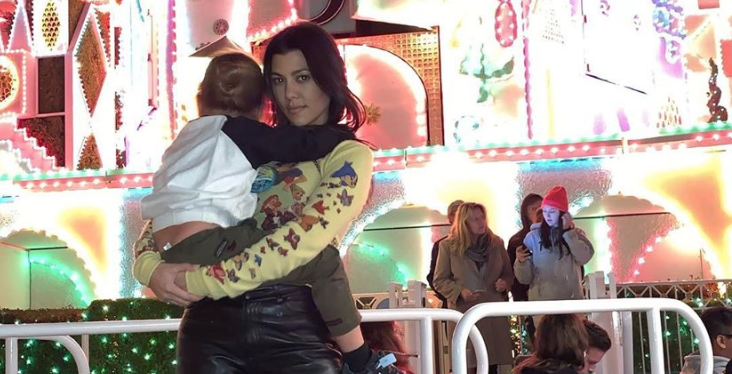 Kourtney Kardashian fans rejoice, it sounds like she hasn’t quit KUWTK just yet. The mom of three was caught filming for the show despite her big fallouts this year.

If you were worried that your favorite Kardashian would no longer be on the show, worry no more. Kourtney Kardashian was seen filming for the reality TV series according to Hollywood Life. Apparently, there are photos going around of Kourtney and her eldest son, Mason, taking a casual stroll. Cameras were seen in the photos capturing the moment.

There’s no telling how much she will be on the show in the upcoming season though. This past season, Kourtney made it clear that she wasn’t happy with the boundaries that were set by her sisters, Kim and Khloe. Kim and Khloe however, were mad that they were the only ones opening up on the show. They felt like they had to make up for her lack of attention to keep the fans engaged.

The family takes a trip

During the season finale of the family show, Kris Jenner made the whole family go on vacation to Wyoming together. They were supposed to bond and mend their relationship, however, it doesn’t really seem to have done much. Kourtney was still mad and her sisters were still mad at her.

Kourtney wasn’t the only sister in trouble during that trip though. Kylie Jenner wasn’t able to come which really made her sister, Kendall Jenner, very angry. Apparently, Kendall came all the way from Europe but Kylie didn’t even come from California. Kendall made it clear that this was something they always did growing up. But, Kylie needed to stay home with Stormi this time around.

The episode ended with all the family “getting along” as they impersonated each other, but honestly, their impersonations were kind of offensive and rude too. Oh well, families fight, but at the end of the day, they love each other.

While fans probably hope that Kourtney is on the show more in the coming season, it doesn’t really seem like she will be. However, only time will tell.

Do you want to see more of Kourtney on KUWTK or do you understand her boundaries? Let us know what you think in the comments. Come back to TV Shows Ace for news on all of your favorite Kardashian family members.