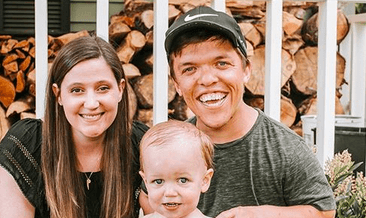 If you’re a fan of Little People, Big World, you probably know that Tori and Zach Roloff just had their second child together. The LPBW couple has one son, Jackson, who is two years old. Lilah Ray was born on November 19.

On November 21, Tori posted her first picture of the little girl and wrote, “Lilah Ray Roloff Born on November 19th at 6:52pm 8 pounds 9 ounces 18 1/2 inches long. Welcome to the family sweet baby girl! 🎀” She will be one month old in just a couple of days.

Since her birth, Tori has been very honest and is sharing lots of updates about their recent addition. She recently opened up about her postpartum body image issues. During her pregnancy, she talked about how hard pregnancy can be. LPBW fans seem to appreciate the mom’s honesty.

After Lilah’s birth, Zach and Tori talked about the new baby and introduced her to the world. This video was released via TLC.

So much to be thankful for this year! Happy thanksgiving from our family to yours!! 🧡💛 #storyofzachandtori #zandtpartyoffour

It turns out that Tori had a C-section scheduled, but Lilah was born two days before the C-section. Tori said, “It was kind of fun just experiencing labor,”. In the video, Zach also revealed that Tori had to convince him of the name “Lilah Ray”. Her middle name is a family name. It’s Tori’s dad’s name and Tori’s grandfather’s name was Raymond.

LPBW fans have enjoyed watching this video to learn all about the new baby. Plus, they like seeing new pictures via social media.

In the recent video from the LPBW family that TLC shared, the couple talks about parenthood. They comment on how much easier Lilah is in some ways compared to Jackson. Tori does mention that she sleeps for shorter lengths of time. But, the new addition seems to be eating better than Jackson was.

Because of this, LPBW fans are wondering if and when the couple will expand their family again. In the video, Zach mentions, “I could have a third.” In response to this, Tori hesitates before saying anything. Then, the mom-of-two jokes, saying, “He’s gonna carry the next one.”

Previously, Zach and Tori have mentioned that they hope to have more children. Tori doesn’t seem to love being pregnant, but fans agree that she seems like a great mom. It’s likely that she thinks it’s all worth it.

Lilah girl got her first bath today! She liked it so much she blew out her pants to earn herself a second! 🛁 Also. Murphy would stay next to this kid all day if he could. 🐶 #lilahrayroloff

Jackson and Lilah are a little over two years apart. If they keep with the same pattern, it will likely be a little while before they have another baby.

What do you think of the new video about Lilah? Do you follow Tori on social media? Leave a comment below.