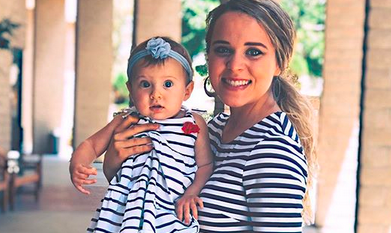 On social media, both Jinger Duggar and Jeremy Vuolo post lots of pictures of their young daughter, Felicity. Counting On fans love to see whatever Jinger and Jeremy decide to post about their little girl. They are some of the most active social media users in the family. Fans seem to enjoy this though because they get the latest updates this way.

Recently, Jinger shared a new post of Felicity. She writes, “She makes friends everywhere she goes!” The post features two pictures of Felicity with a small dog. The one-year-old seems very happy to be posing with the dog.

In response to this post, the Counting On family received a lot of love. Fans can’t get over how cute Felicity looks in the pictures. Quite a few fans suggested that Felicity get a pet of her own. One fan writes, “She needs a dog!” Another one said, “She needs a puppy”. Yet another fan said, “Geee mom and dad, I think she needs a puppy!” Someone else wrote, “Someone needs a puppy 🐶” in agreement.

Have Counting On stars Jeremy and Jinger Vuolo had a pet?

Some fans of the Duggar family recall that Jeremy and Jinger previously had a cat, who was named Jake. The orange feline was a part of the Vuolo family for a little while, beginning in 2018. Then, Counting On fans noticed that Jake was appearing on social media less often.

Happy Thanksgiving! This was one—of many—attempts at a picture with all of us. If you’d like a “put together” family photo, please make your way over to @jingervuolo’s account. 😬

Finally, a fan asked, “Jeremy did you guys bring your cat or leave it with friends??” This question was asked when Jeremy and Jinger made the move from Laredo, Texas to Los Angeles, California. He said, “We had to leave Jake with a family in Laredo 😩 I’m terribly allergic, but when we rescued him from the street I cared more about him finding a home than my allergies. But allergies plus a cat aren’t a great combo. He’s happy, though!”

Due to Jeremy’s allergies, it doesn’t seem likely that his family will be getting another pet. At least, they won’t be adopting any pets that have fur. During an episode of Counting On, he said, “I did grow up with pets. The funny thing is I’m allergic to pet dander, so I never had pets with fur. So I had funky pets. I had bearded dragons, I had turtles, I had frogs, I had snakes. I love pets. And I love Jake. But I’m terribly allergic to him.”

What do you think of this photo of Felicity with the dog? Do you hope to see the Vuolo family grow, whether the new addition is a baby or a pet? Leave a comment below.

For more Counting On and other TLC news, stay up to date with TV Shows Ace.