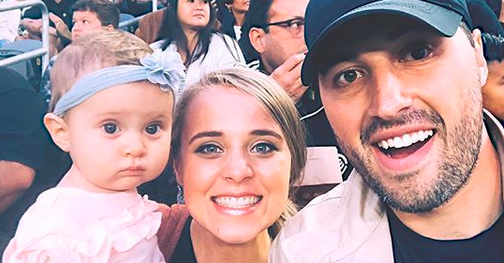 Counting On stars Jinger and Jeremy Vuolo moved this summer. The family, including their one-year-old daughter Felicity, moved from Laredo, Texas to Los Angeles, California. They made the move so that Jeremy could go to school at the Master’s Seminary.

So far, things seem to be going well for the Vuolos. They seem to be settling in and getting a feel for their surroundings. Of all of the Duggar kids, Jinger is one of the most active on social media. Jeremy is often using social media too. This has been a great way for Counting On fans to stay updated on their lives.

Since they have moved to the west coast, the couple has become foodies. They are loving trying all of the new foods in Los Angeles. Jeremy especially likes to document whatever new foods he has been trying. Recently, for Thanksgiving, Jinger shared a tasty pumpkin spice muffin recipe with her followers.

Yesterday’s food crawl was a total success! Felicity thoroughly enjoyed getting in on the conversation, tasting the food, and seeing the sights as we explored LA.

Recently, Jinger went on her Instagram account to share an exciting update with her fans. She started her post by saying, “You’ve all probably noticed recently that I love @fonuts 💕“. The picture she shared featured her smiling and holding a donut. She continued, saying, “They’re a bakery in Los Angeles that makes baked (not fried) donuts that are gluten-free and have vegan options. Well, I decided to take my love for baking to the next level and partner with @fonuts to release a ‘Jingerbread’ flavor for the month of December! 🍩“.

Then, Jinger suggests fans head to one of the donut shop’s locations in Los Angeles. She finishes up her post, adding, “It’s my first time taking my passion for baking to the next level and what better time than the holiday season?! 😊🎄”

In the comments section of Jinger’s post, Counting On fans are sharing their excitement for her. They think it’s really neat that she has gotten a donut named after her. Plus, they think the name is super cute. Fellow TLC star Audrey Roloff, who is no longer a part of Little People, Big World, said, “Send me one please 😱”.

Fans are asking Jinger if there is a way to order the Jingerbread donuts. Unfortunately, Jinger did not say that that is an option. It sounds like they’re only available at the Fonuts stores in Los Angeles.

What do you think of Jinger having a donut named after herself? If you’re near Los Angeles, are you going to give it a try? Leave a comment below!