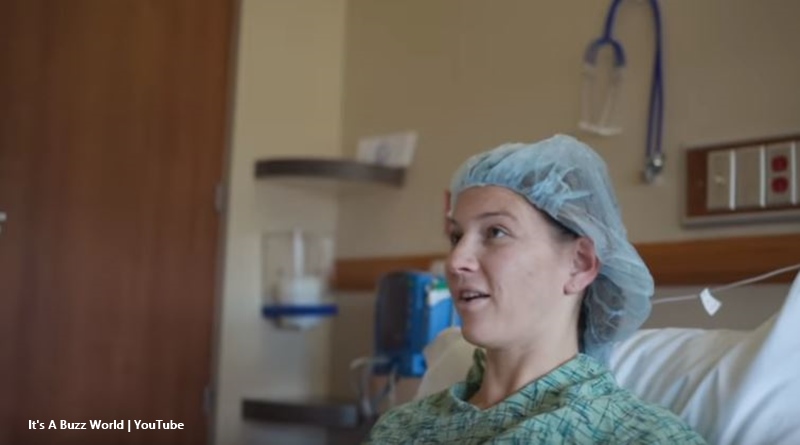 OutDaughtered fans know Danielle and Adam Busby just returned from their Bible mission to Brazil. On their return, Danielle went to the hospital for surgery and they shared about it on Instagram. But, they never made it very clear on the site. Now, she explains all about it in a new video, and it’s quite radical news.

Over on Instagram on November 12, Danielle revealed she underwent surgery with Adam at her side. TV Shows Ace reported, “Danielle Busby posted that it was surgery day, but didn’t share details.” Over on his IG, Adam also shared about it, and we noted he said, “back where this crazy journey started” as he asked his followers for “prayers.” They are at The Woman’s Hospital of Texas. That could mean that it is some kind of female problem. This is where the quints were born.

Well, it turns out that the surgery revolved around female problems. We know that the Busby’s said in the past that they don’t plan any more kids. And, it turns out that Danielle’s suffered from a lot of pain. No wonder she looked so grumpy, as some of that pain, she explains, really took it out of her. So, it seems that this scheduled surgery came recommended to assist her with that discomfort and ill health.

Danielle explains her surgery in a video by Adam

Adam Busby’s fast becoming a professional video maker. We reported that he’s getting so good, he might not need TLC for much longer. We reported that speculation in an article about the couple taking a long break from filming for TLC. Plus, we noted that Adam’s so very unhappy with the way TLC edits OutDaughtered, he might be better off making his own videos alongside sponsored partnerships. His latest video revealed the surgery, where Danielle explained all about it.

As an intro to the video, Adam noted that the surgery really needed more than the written word. That’s why he opted for a video. In the video, we see Danielle looking a bit nervous as she awaited her surgery. Dressed in typical hospital garb, she started explaining all about why she needed the surgeon’s intervention. And, it’s quite radical. Certainly, while scared, she also seems a bit relieved that finally, her problems will be addressed.

In the video, the OutDaughtered mom said, “I know this isn’t something we ever shared or talked about.” She added, “Life after having quintuplets has been super painful.” Danielle explained, “your body goes through this major shock.” While Danielle’s “proud of her body,” as it “carried the girls through to 28 weeks,”it’s been very challenging.” And, the last three years brought Danielle a lot of “physical pain.” It got so bad this last year and Danielle suffered so much pain, sometimes she couldn’t even get out of bed. She said she suffers from PCOS. So, she had a hysterectomy.

The Mayo Clinic explains this relates to “Polycystic ovary syndrome.” The condition might cause “enlarged ovaries.” Of course, many other issues accompany the condition, and if they become very severe, long-term health can be affected. They note, “a cluster of conditions including high blood pressure, high blood sugar, and abnormal cholesterol or triglyceride levels that significantly increase your risk of cardiovascular disease.” And, that’s just one of many possibilities. So it’s probably a good thing the OutDaughtered mom finally got some attention.

After the radical surgery report

After Danielle came out of surgery, Adam explained that nothing life-threatening was found. He did note that the OutDaughtered mom had some spots of endometriosis though. The Mayo Clinic notes, “it’s is an often painful disorder in which tissue similar to the tissue that normally lines the inside of your uterus — the endometrium — grows outside your uterus. Endometriosis most commonly involves your ovaries, fallopian tubes and the tissue lining your pelvis.”

The OutDaughtered dad said that the uterus got removed, but the good news is they left the ovaries. And, as Danielle said, she doesn’t “wants to go through menopause early.” Well, all seemed to go as well as could be expected. We really hope that for Danielle, the pain will become a thing of the past and she can enjoy raising her lovely children without feeling so debilitated.

What do you think about Danielle struggling for so long before getting the surgery done? Did you ever suffer from Danielle Busby’s condition? Share your thoughts in the comments below.

Remember to check back with TV Shows Ace often for more news about OutDaughtered.