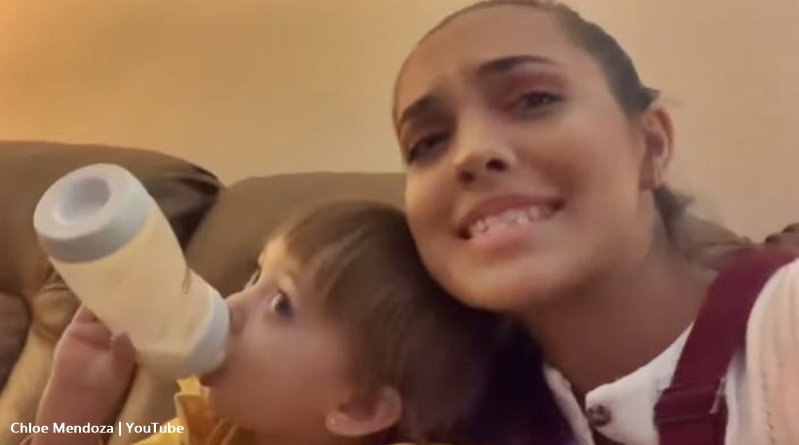 Unexpected fans heard that Choe Mendoza won’t return to the TLC show again. But she’s still very active on her own YouTube Channel. She made a video about a day at college and juggling child-rearing. Many of her videos inspire and help other teen moms, and she gets a lot of kudos for her maturity in those vids.

In her previous video, titled My One year Old Does My Makeup, fans thought she looked pregnant. TV Shows Ace reported on some of the comments fans posted on Instagram. One person said, “word on the street is your pregnant…. any truth to it??” In response, Chloe said, ‘zero truth.'” Well, on the actual video, someone commented, “She’s definitely expecting again congratulations ur an awesome mama.” Another Unexpected fan wrote, “Is she pregnant again??? My god why can these girls not figure out birth control!”

But, not all that many people picked up on her pregnancy. One who did, suggested it’s just that Chloe birthed a child. Of course, that may be why she looks a bit “thick.” Well, whether she’s carrying another child or not, she seems determined about her education. In her video about juggling child-rearing with college, she seems very focused and even talks about next semester choosing some easier electives. A fan noted, “Chloe I’m so proud that your going to college and raising Ava you are the best mom in the world and just know Ava love you so much🥰🥰.”

Classes at college start at 9:40 but Chloe’s up with baby Ava long before

At the start of her video, the Unexpected star noted that by the time she heads off to college, she’s already been up for three hours. Baby Ava needs feeding and all that sort of thing. She dropped Ava at her “school” and then made her way to math class. Chloe mentioned in the video how tired she felt after her studies. Plus, she noted that she thought she chose easy electives but failed. So, sometimes she feels drained. But some days, she gets some time to herself between college classes.

Chloe explained that Mondays and Wednesdays mean she only gets out of college at 4:20. But, on other days, she goes “home to eat some lunch or go to the gym.” If that’s not a baby bump, the gym sounds like a great idea. Sometimes, if there’s a long break between classes, she takes a nap. And, Chloe looks tired. Any parent can tell you that small kids take a lot of work. Chloe says that Ava enjoys her day school, but every day after college, she can’t wait to go and “pick her up.”

What do you think about Chloe Mendoza juggling college with child-rearing? Do you admire her working hard to complete her education? Sound off your thoughts in the comments below.

Remember to check back with TV Shows Ace often for more news about the cast of Unexpected.

Mayim Bialik Crumbles About Final Moments With Leslie Jordan
‘Bringing Up Bates’ Katie Bates Bursts Into Tears On Camera
‘American Idol’ Producer: Simon Cowell Had To Learn To Be Mean
Where Is Matt Lauer Five Years After Shock ‘Today’ Firing?
‘7 Little Johnstons’ Amber Johnston Reveals The End Is Near