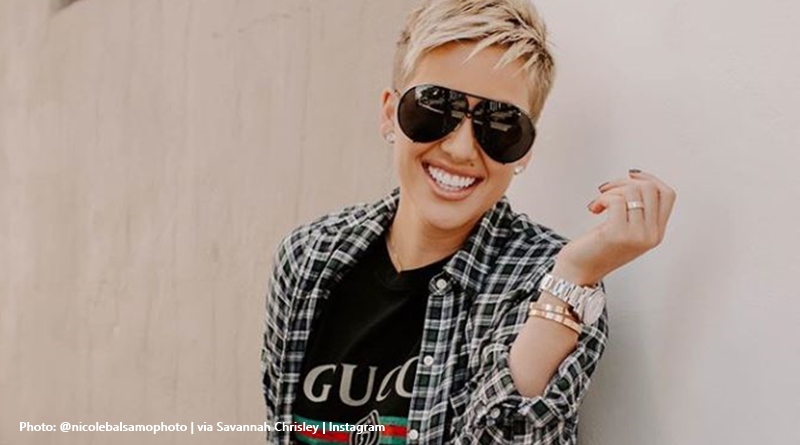 Chrisley Knows Best fans freaked out when Savannah Chrisley cut her hair really short. She shared the new look on her Instagram page with an empowering message about looking the way you want to. But, pressured by fans, she now admitted it happened after a disaster. However, she’s happy with the way it worked out.

Savannah’s been through a few ups and downs recently. TV Shows Ace reported her estranged sister Lindsie set her sights on her and called her out as fake. Plus, rumors that she and Nic Kerdiles were in trouble also surfaced. But, Savannah emerges smiling. And, she managed to do that with her hair cut that shocked fans in mid-October. She appeared on her IG with very short cropped hair, not unlike Ellen DeGeneres. Well, that cut totally suits Ellen but made for a mega-change for Savannah.

In her post where she first shared the photo of her hair, the Chrisley Knows Best star wrote, “ladies…do what YOU want to do. Don’t base your looks, opinions, beliefs, etc on a man and what HE wants. It’s our world and they just live in it 😉…’There’s something so special about a woman who dominates in a man’s world. It takes a certain grace, strength, intelligence, fearlessness, and the nerve to never take no for an answer.’ —Rihanna.”

Fans reacted to the cut, Savannah confesses to a disaster

Some fans loved the new look, but others freaked out. Even her dad, Todd Chrisley commented on it. he wrote, “I’m not sure what I’m concerned with most, the lack of hair or the flannel?” Fans also commented. One said to Todd, “I know you about had a heart attack!!!! 😂😂😂 go girllllll @savannahchrisley.” Others were a bit alarmed, and one Chrisley Knows Best fan never held back. They simply said, “I don’t like it.” Another fan joked, “Is this her coming out? If so… ‘😍 hiiiii!'”

But, Savannah eventually confessed she only cut her hair after a disaster. BravoTv reported that she said, “I’ve always wanted to cut my hair since Miley Cyrus did hers super short.” Savannah continued, saying, “But then, recently, I think I got my hair colored too close in time by two different people. And I don’t know what happened, but it just fried my hair. So I kinda had no choice because literally back here it was just a straight line cut with bleach. It was not a good day for Savannah. So, finally, I just was like I’m gonna cut it. I did it and I love it.”

Ladies…do what YOU want to do. Don’t base your looks, opinions, beliefs, etc on a man and what HE wants. It’s our world and they just live in it 😉 ••••• hair: @shannonplunk @joseeberhair Photo: @nicolebalsamophoto "There's something so special about a woman who dominates in a man's world. It takes a certain grace, strength, intelligence, fearlessness, and the nerve to never take no for an answer." —Rihanna

So, even though she can pull off the cut, and many fans liked it, Savannah never actually planned for the short-short style. What do you think? Did you ever end up cutting your hair so short because you “fried” it? Share your experiences in the comments below.

Remember to check back with TV Shows Ace often for more news about Chrisley Knows Best.