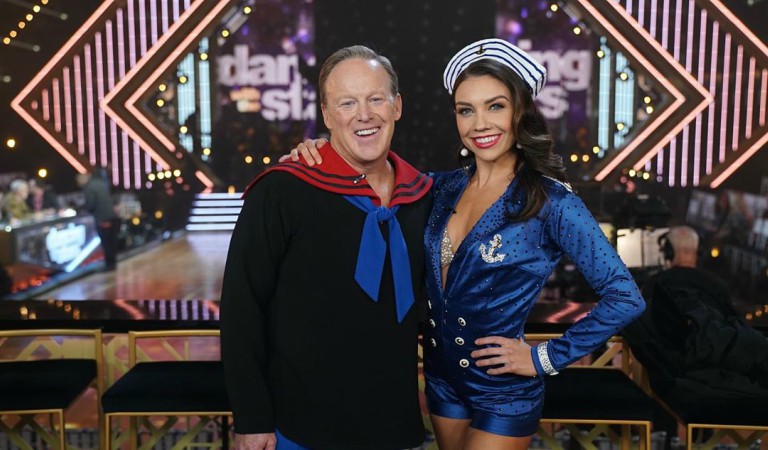 Dancing With The Stars stirred up controversy this summer by announcing that former White House official, Sean Spicer, as a contestant on Season 28. Even host Tom Bergeron expressed his displeasure at the time with the choice to cast a politically divisive contestant.

Bergeron said he had hoped the show would be free from the political drama.

“[Hoped for a ] joyful respite from our exhausting political climate and free of divisive bookings from any party affiliations.”

Some thoughts about today pic.twitter.com/aCQ4SHrGCI

However, as they say, the show must go on. Many fans were willing to give Sean Spicer a chance. Unlike some other contestants who barely made an effort, fans appreciated that Sean gave his all in the dances. But was his all enough to be a better dancing than some of the other contestants? Check out his dance for the Monday, November 4 show to judge for yourselves.

However, Sean hasn’t even been in the bottom two at all this season on Dancing With The Stars. Fans and judges are perplexed on how someone like Ally Brooke can get a perfect score of 30 and still end up in the bottom two. That was the situation on Monday night.

The judges are often neutral in their criticism of how the fans vote. Us Weekly reports that Carrie Ann Inaba called the pattern of fans saving Sean from elimination “frustrating.”

“There are really great dancers being sent home, but that is part of our show. It’s always been the audience and the judges’ perspective. So I’m not — I can’t be mad at it, but it’s frustrating.”

DWTS Contestants Who Have Been Eliminated Before Spicer

For the last three DWTS eliminations, every contestant eliminated had higher scores than Spicer. During Week 6, Sean’s score was a 21. Sailor Brinkley-Cook received a 27 for her dance but ended up in the bottom two and sent home.

Week 7 saw Karamo Brown eliminated with a score of 25 compared to Sean’s 18. The Office star Kate Flannery ended week 8 with 24 points while Sean’s dance only received a 20 from the judges.

The biggest surprise was a contestant with a perfect score (30 points) ending up in the bottom two after Sean was announced as safe with ten fewer points than Ally.

Perhaps the judges will consider scoring Sean lower, but it might not matter because the voters are determined to keep Sean in the competition for as long as possible.

As fans know, Sean was President Trump’s Press Secretary in 2017. His time at the White House was controversial because of the false statements he would often make at the press briefings.

However, his loyalty to Trump has not been forgotten by the President. Trump often uses social media to encourage his followers to vote for Spicer, regardless of whether they watch Dancing With The Stars or not. His tweet before Monday night’s show referred to Sean as a “great and loyal guy.”

Vote for Sean Spicer on Dancing with the Stars. He is a great and very loyal guy who is working very hard! #MAGA https://t.co/JGvKANCRqZ

Are Trump’s tweets skewering the votes? Let us know in the comments if you think there’s a chance Sean might win the Mirrorball Trophy.

Season 28 of Dancing With The Stars continues Mondays on ABC.