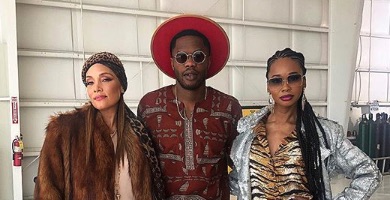 Recently, TV Shows Ace pondered whether Jeff Colby (Sam Adegoke) would return to Dynasty. Jeff is back! This could certainly put a wrinkle in Dominique Devereaux’s (Michael Michele) diabolical plans. Does Jeff know what his mother did?

At the end of Season 2, Dominque Devereaux double-crossed her son Jeff Colby. Mother, son and daughter Monica Colby (Wakeema Hollis) planned to fake Jeff’s death and frame Adam Carrington (Sam Underwood). But, she didn’t exactly do that. She took Adam’s planted cufflinks and received payola from her half brother Blake Carrington (Grant Show).

Jeff, who was poisoned by Adam, left on a jet plane, never to return. Jeff believed he got his revenge and thought he got some mom love and loyalty. But he must have suspected something. Now, in Season 3, Dominque tried to take over the Power of Attorney, which Jeff gave to Alexis Carrington. But, it appears that Jeff moved his millions to an unidentified trust. Dominque can’t get her hands on that tempting cash because she needs to know the actual name of that said trust to gain access to the money. Jeff outfoxed her!

When Jeff went on that plane, fans believed that this was the end of Jeff, as there have been so many Dynasty casualties. But, he is back! Will Jeff finally see that his mom is only evil? Yes! In episode 3, “Wild Ghost Chase,” Jeff finds out the truth. At the Halloween party, Monica dressed up like a cat, questioned the very last police officer at the bloody scene that Jeff staged to frame Adam. This is when Monica found out that mommy dearest took the cufflink. The police never saw it to even question Adam Carrington.

When Monica confronts her mother at the party, who should be there but Jeff. He takes off his mask and reveals that he heard the entire conversation and knows everything! Now, in the highly anticipated musical episode, Jeff is going to test his mom. Will Dominique do her son’s bidding?

According to his Instagram, Sam Adegoke is back and starring in Dynasty. Sounds like we will have a season of the crazy Colbys.

Dynasty fans, are you happy to see Jeff Colby back? Do you think that he will finally see how evil Dominque Deveraux really is? Be sure to check back to TV Shows Ace for the latest on Dynasty. Dynasty Season 3 airs on The CW Friday nights and on The CW app.