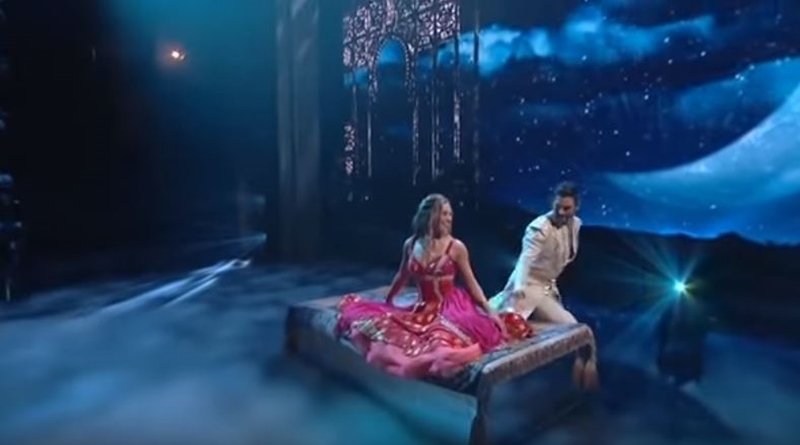 DWTS fans saw Hannah Brown and Alan Bersten score their first nines of the season. Thoroughly happy, Hannah shared her joy on Instagram. Meanwhile, many fans felt that Len was out of line for giving them only seven. But, two out of three is not bad for The Bachelorette alum. Many fans loved the dance they performed on Disney Night.

Hannah and Alan danced a Foxtrot to A Whole New World by ZAYN & Zhavia Ward. The song comes from the film Aladdin. Fans thought that Hannah and Alan carried it off excellently. Fans, however, were annoyed when Len dished out a seven.

But, it seems Hannah’s not letting that get to her. On her Instagram, she shared, “magic carpet ride to my first nines.” She never mentioned the one seven they scored. Plus, on his IG, Alan shared their DWTS performance, saying, “That was magical! I hope you guys loved our dance as much as we did!!”

Loads of congrats poured in from fans. On Hannah’s page, one follower said “Shining, shimmering splendid So beautiful, y’all!!”

Another noted, “This was by far one of the most beautiful routines ever on dwts.”

Here’s another nice example of that: “It was perfect and so are both of you. @alanbersten looks like a real-life prince and you both had the best dance of the night.”

And on Alan’s page one DWTS fan noted, “You guys were amazing, I 100% loved the dance Aladdin is my all time favorite disney movie, and you guys killed it .”

Furious fans hit out at Len for giving an insulting seven

Over on YouTube, fans of the show popped in on the Dancing With The Stars channel just to complain about Len. One said, “Just came here to say Len is an old f*rt.”

Others chipped in with comments like, “This is a dance competition. You don’t judge each person compared to their last performance (ahem spicer) you judge them against each other. And Hannah was hands down the best. Wtf Len.” Many more followed, and on Hannah B’s and Alan’s IG, even more fans vented their fury.

On Alan’s page, many DWTS fans told him to ignore Len’s seven. They too, got especially angry as Len kept referring to previous performances.

“Beautiful!!! Should have been all 10’s. A 7 not deserved. Len needs to be gone,” another complained. On Hannah’s page, they also vented about it.

One fan said, “Really should have been three 9’s. Len was on some sh*t tonight.” Others chimed in, with one furious DWTS fan saying, “Len was not nice at all tonight!! He needs to retire!!”

What did you think about Hannah Brown getting her first nines and sharing her joy? But, do you think Len came across too harshly with an unfair assessment? Sound off your thoughts in the comments below.

Remember to check back with TV Shows Ace for more news about DWTS.