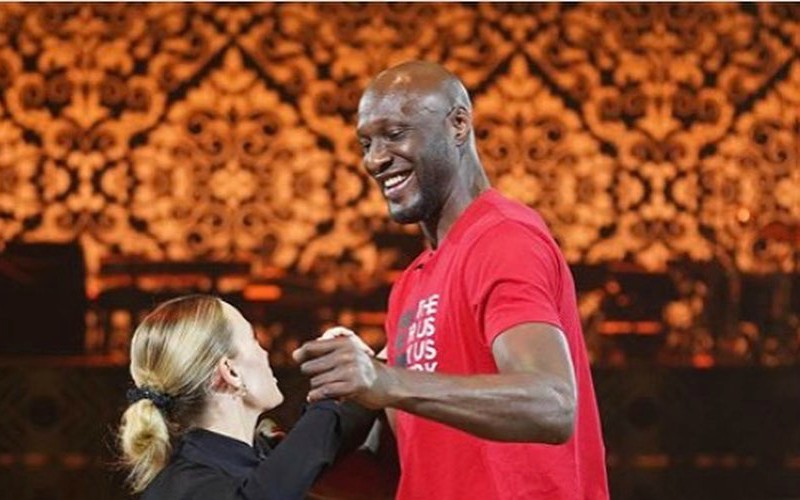 Former Dancing With The Stars contestant Leah Remini is not mincing words about Lamar Odom’s exit from the show. The outspoken actress and Scientology critic guest judged the hit ABC show on October 7th.

As longtime fans know, Leah was partnered with Tony Dovolani for Season 17 of Dancing With The Stars. Despite her lack of dance experience, the star made it all the way to fifth place before being sent home.

As a child, I wanted to sing, dance and act. I wanted to go to a school like Fame (some of you won’t get that reference). I couldn’t sing, (didn’t stop me from auditioning for Annie) and I was only in a tap class for a short time, but when our lives became Scientology, there was no dance, there was no education, there was no outside activities. Doing @dancingABC was such an amazing moment for me because I had just left all that I knew-All my Scientology friends had to shun me, and I lost a whole community overnight. When I signed onto #DWTS, it offered me a new community and new friendships that are still going strong today. It also rekindled my love of dancing. I am now (at my age) really just starting to do things that I love. Dancing is one of those things. And I get to dance with someone like @jonplaterodude, who is not only an amazing talent but also an extremely patient & loving teacher. It’s not easy to teach this old gal new tricks, but he is pushing me to fight through unrealistic expectations of what I think I should like while dancing as well as what I should be able to do, and not allow my fear of how silly I might look to stop me from doing something that brings me so much joy. It is an extremely humbling experience to do something I have not mastered and never will, but still something I would do everyday if I could. I love it that much. I also love eating (badly), but dancing helps with that. Dancing is a also a mood changer. I wanted to share this with you so you too could find your courage to try something that you love that makes you happy, whatever it is. It’s never too late. Life is too short to not spend at least some of your day doing what you love for fear of looking & feeling silly. Just do it. So if you have the chance to sit or dance, I hope you dance 😉 #sundaymotivation

While fans were happy to see her back, they were not happy she was a guest judge. Many fans felt guest judges should have more professional dance experience besides appearing on the show several years ago. However, the casting was part of ABC’s “Cast From The Past” promotion airing this week on various shows.

Fans and television journalists have always been critical of the casting choices of Dancing With The Stars. Stars often have a background in dance or performance. However, the casting choices have taken a new turn after Tonya Harding appeared on the dance competition last year.

Following the success of her appearance, it seems DWTS is veering the casting toward controversy. Many people were in an uproar over former White House spokesperson, Sean Spicer, dancing on the show this season. Another contestant, Ray Lewis, once faced murder charges.

Lamar’s past history pales in comparison, but he had his detractors. The former NBA champion publicly fought addiction and cheating scandals that resulted in his split from Khloe Kardashian. Lamar is sober now and his appearance on DWTS is a clear attempt at redemption.

One Dancing With the Stars rule Leah would change

In an interview with US Weekly after Monday’s show, Leah opened up about how she would change the show. Originally, the show was meant to showcase stars with zero dance training or experience as they learned professional dances. However, over the years, the show has moved away from that and toward any star willing to appear.

To combat the other low scores, Leah gave Lamar a 7. Unfortunately, it wasn’t enough to save him from elimination. Leah was not shy about expressing her displeasure.

For his part, Lamar seemed grateful for the experience. He posted a photo to his Instagram thanking his “sister,” dance partner, Peta Murgatroyd.

Dancing With The Stars continues Mondays on ABC.