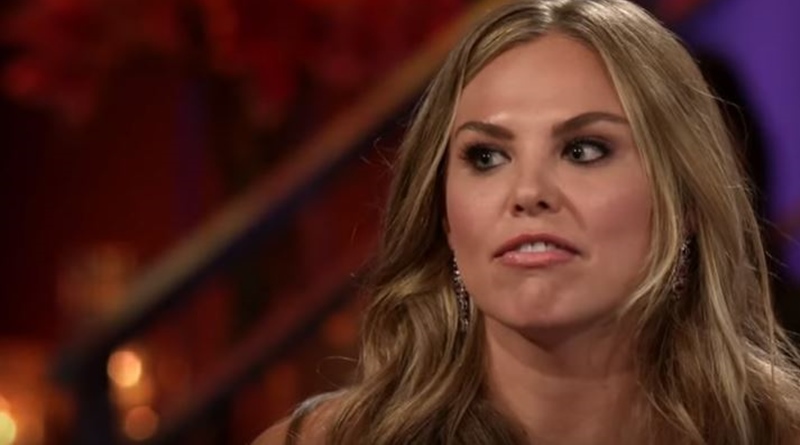 Hannah Brown, the amazing woman who stood up for women and their right to experience intimacy, won a lot of fans during The Bachelorette. Of course, she also ended up with no man to take home. Even rumors of her and Alan Bersten of DWTS dating came to nothing, so far. Actually, she’s focusing on making a career in television and as an author. Plus, no way will she make a successful career promoting sales of FabFitFun packages on Instagram.

After Hannah nearly went for Luke Parker, who got all religious about her sleeping with other men, many fans were relieved he was out the picture. And, now it seems she escaped a fate that would never make her happy. Jedd Wyatt came to nothing, Tyler C went off for his fling with Gigi Hadid, and Pilot Pete will appear on The Bachelor. There, he will try and find the right woman for him.

And, clearly, we noted, being the third option in Hannah’s life means he won’t dance on the ceiling if Hannah pitches up on the show. But, Hannah’s grown from her rather traumatic journey. In fact, she seems less than desperate for a man in her life right now. Actually, she comes across as unbelievably strong these days.

Hannah Brown took to Instagram to share that she did an interview with Marie Claire. In her post, she said, “Thank you so much @marieclairemag and @danismcnally for letting me open up my heart to you.” Plus, she thanked the fans who reached out to her. And, still a bit vulnerable, she noted her thanks. They went to those “who reached out showing me love and support for being vulnerable in my interview.”

But then, Hannah notes that she’s going places and we should, “buckle up it’s going to be a wild one.” In the interview, Marie Claire really dug deep into Hannah, and so much emerged. But notably, she also talked about her career in television and as an author.

Thank you so much @marieclairemag and @danismcnally for letting me open up my heart to you. Thank you to all the people who have reached out showing me love and support for being vulnerable in my interview. We all love, we all hurt, we all have moments of greatness and moments of weakness. I’m thankful I get to share my journey with you all…buckle up it’s going to be a wild one. ✨

Career direction in television and as children’s author

Contrary to what so many people think is best, Hannah Brown’s not desperate for a man. In her interview, Hannah made it clear that she doesn’t need a man to make her whole. And, that’s changed somewhat. Recall, when she went on The Bachelorette, she really wanted to find Mr. Right. Having found a series of Mr. Wrongs, she took a confidence knock, as you do. But, she’s also got a whole new vista ahead of her. Marie Claire wrote, “Brown is looking to Lauren Conrad, Chrissy Teigen, and Reese Witherspoon as career role models.”

Well, those role models certainly bring a high benchmark to jump. But, possibly, the new and strong Hannah will actually reach her goals. The outlet noted, “[Hannah] started college with aspirations of being a broadcast journalist.” They said that Hannah got discouraged.” Too many “people told her that job came with low pay and too much time away from family.”

But, she wouldn’t mind doing television and authoring now. Hannah Brown knows she will always carry the label of reality TV with her, but she knows that’s what gave her a big kick start.

TV and authoring, plus a home line, and no FabFitFun promos

Speaking about planning a career in TV, Hannah Brown also looks forward to writing a book for kids. She explained that it will be all about “being comfortable with who you are.” Then, there’s a home decor line under consideration.  But, one thing for sure, is she won’t make her money by marketing things like FabFitFun, although there’s good money in that. Emphatically, she noted, “I don’t want to be selling SugarBearHair [Gummies] and FabFitFun boxes.”

What do you think about our newly emerged strong Hannah Brown wanting a career in television, a home decor line, and authoring a book? Do you think she’ll do better without having a man in her life as her main objective? Sound out your thoughts in the comments below.

Remember to check back with TV Shows Ace often for more news about The Bachelorette‘s Hannah Brown.