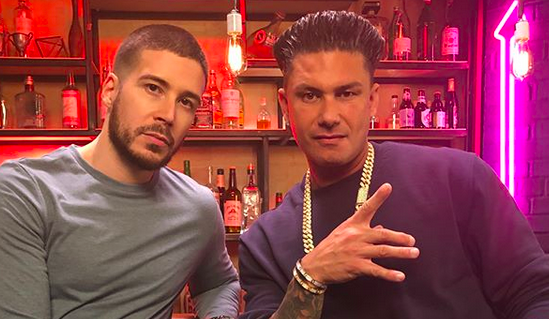 Get ready to Gym, Tan and Laundry in Vegas! Jersey Shore’s Pauly DelVecchio (“DJ Pauly D”) and Vinny Guadagnino are headlining another MTV spin-off airing in 2020.

The duo are original stars of the MTV hit Jersey Shore. The reality show aired between 2009 and 2012. It featured friends living in a house on the shores of New Jersey for the summer. Cameras filmed as the cast got in fights, partied at night clubs and the endless stream of hookups going into the “smush room.”

Young adults flocked to MTV each week to see the antics of their favorite housemate. The show brought an endless amount of new terms to popular culture all across the country. Some of the more popular stars – Jenni, Snooki, Pauly D and Vinny – all went on to have their own spin-offs.

Most of the cast reunited in 2018 for a new show called Jersey Shore: Family Vacation The cast once again lived in a house together, but this time in Miami, Florida. Now in their 30s, many of them were married with children or in serious relationships.

Fans were shocked in 2014 when Mike and his brother were indicted on tax evasion. They eventually pleaded guilty. Mike was recently released from prison following his 14-month sentence. Season 2 of Jersey Shore: Family Vacation had a storyline about his time in prison and how his wife, Lauren, was fairing without her man.

While many of the other cast has started their grown-up life, Vinny and Pauly D are still single and ready to mingle.

Before this new Vegas show, Vinny and Pauly D had a joint dating show. Double Shot at Love featured the friends living in a house with 20 women. The show was a huge success at MTV. It wasn’t a success at finding Pauly D love. The bachelor chose to remain single at the end of the dating show.

[email protected] and I are living in a house with 20 women. What could go wrong? 😅Be sure to watch the season premiere of @DoubleShotAtLove on Jerzday, April 11th! 🌹 …. Everybuddy, enjoy ..

The working title of their new show is DJ Pauly D and Vinny’s Vegas Pool Party. According to People, the show revolves around the dynamic duo giving their friends a taste of the Vegas life.

“Between Pauly D’s successful DJ residency and Vinny entertaining the masses on the strip, the two will help teach their friends the definition of work hard, play hard in the infamous Sin City.”

As for Jersey Shore: Family Vacation, Vinny doesn’t see it ending anytime soon. He recently told Jenny McCarthy on her Sirius radio show that the cast films all the time instead of filming a month at a time. He says MTV breaks up what they film into seasons and the show will continue to air “indefinitely.”

Jersey Shore: Family Vacation airs Thursdays on MTV. The new Vegas spin-off is set to premiere on MTV in 2020.