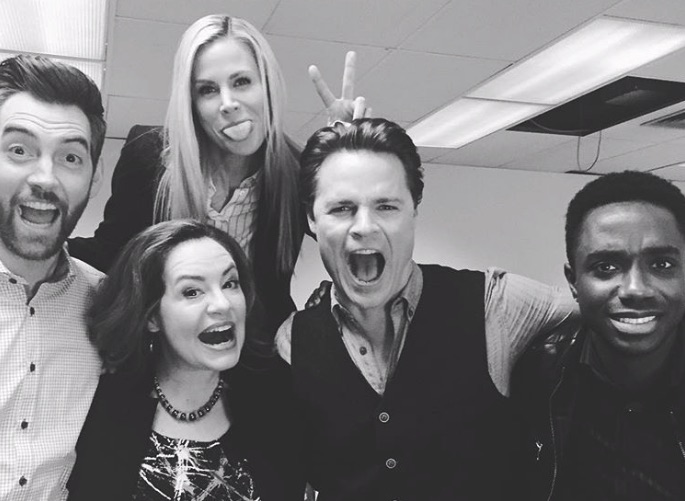 On Tuesday, Dylan Neal revealed that a new Gourmet Detective is starting pre-production next week! He and Brooke Burns will be returning in the fifth installment of the Hallmark Mystery series in a Cajun-infused mystery entitled Roux the Day. When should fans expect the return of the Gourmet Detective?

Dylan Neal announced to fans on Tuesday that the Gourmet Detective is returning to Hallmark in early 2020. The latest mystery, Roux The Day, will start pre-production in another week. Calling the script “the best one yet,” Roux The Day is a “Cajun-infused” mystery.

Neal, who plays Henry Ross, the chef-blogger who calls himself the gourmet detective, has been subtly hinting for months that the series could be resurrected. The last Gourmet Detective, Eat, Drink & Be Buried, was released in October of 2017. Roux The Day is starting pre-production almost exactly two years later.

What we know now about Roux The Day is that Brooke Burns will return as Detective Maggie Price. Although Henry and Maggie are closer in their relationship, Neal revealed that the fifth episode will have mystery “with all the banter and jousting you love between Henry and Maggie with just enough twists and turns to keep you guessing right until the very end.” Neal also pointed out that Bruce Boxleitner is returning as Henry’s father, Jim Ross. There is no news on who else will co-star in this latest installment.

Although in August 2018, Dylan Neal had posted that the Gourmet Detective was canceled, it appears that it was not completely canceled. On Tuesday, Neal revealed that something happened a few months after the Hallmark Mystery series was canceled. Neal and his writer/producer wife Becky Southwell was given the order to write the fifth episode in the series. He explained that although they were technically canceled, like a phoenix rising from the ashes, the series returned.

“It’s been almost a year since Becky and I got the order to write a new Gourmet Detective. I know I told you all that we had been cancelled and it was true – we were done! Then, like a phoenix from the ashes… well, here we are again.”

But, there was a long wait. The script was completed months before they got the ok to film Roux The Day. Meanwhile, Hallmark has been regularly airing old episodes of the food-based romantic mystery series.

Dylan Neal made it clear that Gourmet Detective fans were the reason that this show was saved. On behalf of Brooke and Becky, and the others involved with the series, he wanted to thank fans for supporting the show. The fans really made it happen!

“Becky, Brooke and I, along with everyone involved with these productions would like to thank you all for your dedication to this franchise, as it’s your repeated viewing of these movies that has brought it back to life.”

Gourmet Detective fans, are you excited about the news? Are you looking forward to the fifth installment of this Hallmark Mystery series? Please share your comments and make sure to check back with TV Shows Ace for the latest with Hallmark news. Roux The Day will be out in early 2020.