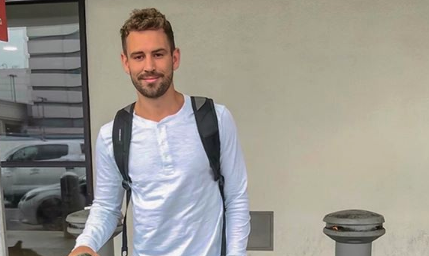 Bachelor nation fans never stop trying to make it look like two people are dating. This time, everyone believes it’s Nick Viall’s turn to be in a relationship. Spectators think that he is dating Rachel Bilson.

So to start, the fans have a point. Nick has been leaving a lot of comments on Rachel’s post, Cosmopolitan said. And some of the comments are kind of funny depending on how you think of them. Rachel posted a photo of herself sitting on top of a mountain. Of course, she looks fabulous. She captioned the photo: “Climb every mountain.”

Nick chimed in on the post commenting “nice mountains.”

Now, is he really complimenting the mountains in the photograph, or is he making an innuendo about something else? Knowing Nick, probably the latter.

Don’t worry…it gets even crazier. Apparently, Nick had Rachel on his podcast “The Viall Files.” Nick posted a photo of the two of them next to each other on a couch. He captioned it “Will we choose to forgo our individual rooms…”

Rachel commented back and said: “He slid into her….dms #sheaccepted.”

Fans are going insane over these comments. Either they are secretly dating, or she is just saying he asked her to be on his podcast through DM. Then, she accepted. So it’s either something really steamy…or something really not. However, Bachelor Nation seems to be shipping the couple pretty hard.

There are a lot more comments between the two, but they are basically all the same. This could definitely mean they are flirting, but they could also just be friends. There’s just no telling when it comes to Instagram only flirting.

Will we choose to forgo our individual rooms…

As far as her relationship status, Rachel says she is single. She says she hasn’t met anyone she wants to introduce her daughter too. Honestly, this is so great of her to know what’s best for her and her daughter. That means she must be an amazing mom. But, could Nick Viall be the guy that finally gets through to her?

“I was talking to this guy a few months back. Anytime I would bring my daughter up, [he] would never pursue the question or ask more about her. It was a red flag because anyone that you’re going to get involved with, if you have a kid, they have to be all about the kid,” she admitted over a past relationship.

What do you think of the couple? Do you want to see Nick and Rachel date? Let us know if you agree with the other Bachelor fans.

Be sure to watch the finale of Bachelor in Paradise tomorrow night. You certainly don’t want to miss the break-ups, engagements, and reunion.