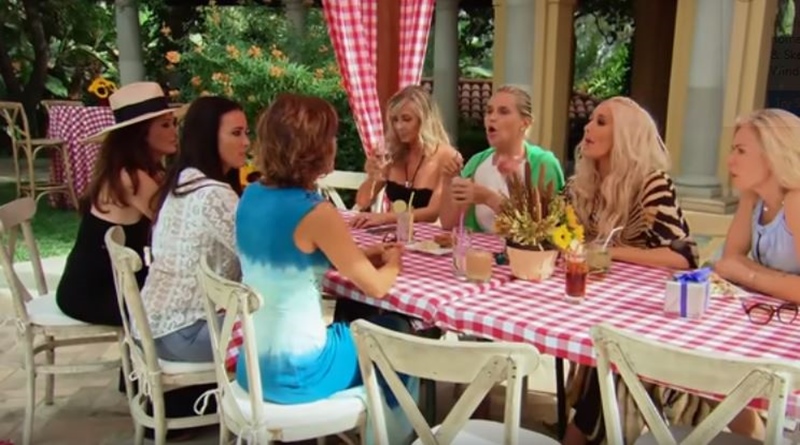 RHOBH rumors that Erika Girardi got demoted by Bravo rush around social media. If she lost her diamond, then LVP’s fans hope for some karma. In fact, some of Lisa’s fans told her off on her Instagram. As repeatedly recurs on comments, it seems that she should remember to never throw stones in a glass house.  Of course, it basically means that if she’s really lost her diamond, she should have recalled nobody’s perfect. Specifically, they feel she bad-mouthed Lisa Vanderpump and the chickens came home to roost.

Over on her Instagram, fans repeatedly asked her if it’s true she’s not with RHOBH anymore. However, so far she declined to answer. But, eagle eyes spotted the fact that ‘RHOBH‘ no longer features on her profile. Meanwhile, on her Twitter account, no word comes from here there either. @lilbuttercupAZ asked, “Can you tell your #fans why you deleted any #RHOBH tags off your Instagram? Are you choosing to leave the show as well? Does it have anything to do w/the ‘new cast’ & the direction their taking? Bc we all know you Do NOT PLAY when it comes to the #fake or “staged” drama.”

Once again, no response came from Erika. Fans become frustrated as the rumor’s been running an entire day. But no calming words come from her. The rumors arose “after Bravo added Garcelle Beauvais and Sutton Stracke to the season 10 cast,” All About Truth reported. RHOBH fans immediately started speculating that it might be Erika who lost her diamond. And silence from her helps to keep the rumor fire burning.

Rapidly gaining the reputation as members of Team Lisa Vanderpump, Team Lisa fans emerged to stab at Erica. On Erika’s Instagram, one user posted, “Doing additional jobs to pay off that three million debt you said was already rectified and they apologized for ….don’t call out LVP when you lie too….people who live in glasses houses shouldn’t throw stones.” Other LVP fans simply said snarky things about her deserving to just go away as she often attacks fans on social media.

But, RHOBH followers shouldn’t dance on the tables just yet as nothing’s been confirmed about Erika out the show. If there’s any truth to it, this may not be anything to do with last season. @v_jank noted, “[If it’s true] I think it has do more with her law suits. She won’t be able to talk about anything, and did you notice how her ‘team’ disappeared at the end of the season. Maybe daddy said no more.”

If the rumors are true that only Erika lost her diamond, then that’s great! Shows there’s hope and bravo was listening.. on the flip side, it also shows that they’re so far up Kyle’s ass by keeping Teddi.. that lady irks most viewers.. even more than Erika..🙄 #RHOBH

The lawsuit for Erika could factor in behind the demotion

Reality Blurb reported a few days ago about the lawsuit. They noted, “After [Erika’s]  husband, attorney Thomas Girardi, allegedly failed to pay off his $6 million loan balance with the Law Finance Group, the company returned to court in hopes of convincing a judge to order the Real Housewives of Beverly Hills star to appear in court with her financial records.” The Blast turned up some court documents.

The Blast confirmed that “Law Finance is demanding the judge order Erika Jayne to appear in court with her financial records including bank statements and sources of income, in an attempt to collect on the debt owed to them.” So, while this sort of thing’s being juggled about online, RHOBH fans are bound to believe there’s some truth to the rumor Erika Girardi’s been demoted.

What do you think about it? Have you heard anything more? Let us know in the comments below.

Remember to check back with TV Shows Ace often for more news and rumors about RHOBH.