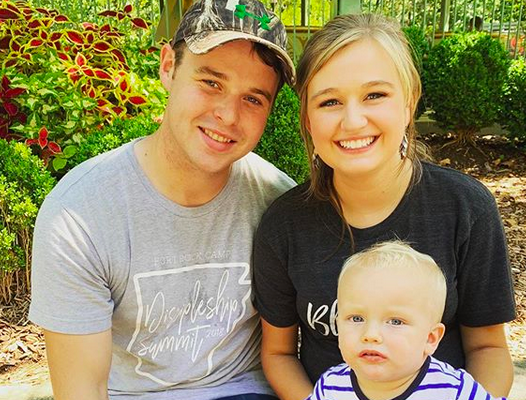 Counting On stars Joe Duggar and Kendra Caldwell got married in September 2017. Shortly after, in June 2018, they welcomed their first child, Garrett, into the world.

Happy 1st birthday Garrett🎉💙🎉💙I can’t believe one year ago that you entered the world. You have brought so much joy just seeing you explore all of the firsts in life! You love to explore with your little fingers, little hands and little feet. We love you so much💙We know you will be such a good big brother to our new addition this November! #firstbirthday #smashcake

Now, they are currently expecting their second child together. They will have a baby girl in November of this year. In just a couple of months, one-year-old Garrett will become a big brother.

In a recent post over the weekend, Kendra posted on her shared Instagram account with Joe. The Counting On star shared a series of photos of Garrett in the stroller with his uncle, Isaiah. Kendra’s mother gave birth to Isaiah shortly after Garrett was born. Isaiah was born in the fall of 2018.

In the photos, the two little boys seem to be loving their walk together. They both look happy and they seem to get along well. It’s great that they have this special time together and that they’re so close in age. In her caption, Kendra writes, “Garrett and Isaiah are cute little stroller buddy’s!!! @thecaldwellfamily #walkinthepark #unclenephewtime”.

Recently, Kendra’s family also shared a few photos of Garrett and Isaiah together on the Caldwell Family Instagram page. They wrote, “So happy to be together again!” There are a few sweet pictures of the two little boys sitting near each other. In one, Garrett is reaching out to touch Isaiah.

So happy to be together again!

In the comments section of Kendra’s post, some Counting On fans are confused about who Isaiah belongs to. Though Kendra and Joe have not responded to any comments, a couple of fans have stepped in to clear things up.

Several fans also wanted to know who was older. Again, fans answered each other’s questions so everyone can know that Garrett is older.

One fan even writes, “Awww they’re so cute!! Some people might think it’s weird that Garrett’s uncle is younger than him but personally I think it’s cool!” Another adds, “How adorable are they??? So cute that they’re uncle and nephew”.

What do you think of these sweet pictures of Isaiah and Garrett? Do you think it’s adorable that they are such good friends? Leave a comment below!

For more news about Counting On and the Duggar family, stay tuned.