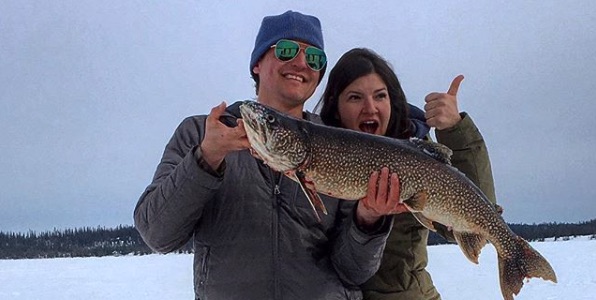 Jane Kilcher just announced on Friday that they have wrapped filming for Alaska: The Last Frontier Season 9. Will Jane and Atz Lee Kilcher’s kids be on the new season? Here is what we know.

When you have a lot of fun on a shoot and you make the cast and crew do a group photo ! See you on the Telly soon!!!!

Their Kids Don’t Want To Be On Alaska: The Last Frontier

Back on Mother’s Day, Jane Kilcher shared a personal message on Facebook revealing what we don’t get to see on Alaska: The Last Frontier. We don’t get to see their children. Although we have seen Jane as a wife, fishing, hunting and providing for her life with Atz Lee, we do not get to see her as a mother. Her May 12 post reminded fans that she may not be “portrayed” as a mother, but her daughter Piper is always with her “behind the scenes.”

“On tv I am not portrayed as a mom because our kids do not want to be on the show .. but I am a mom and my daughter is always with me behind the scenes lol.. happy Mother’s Day .. I have the day off from filming and am spending it with other Kilcher moms!!! It’s going to be a great day!”

On tv I am not portrayed as a mom because our kids do not want to be on the show .. but I am a mom and my daughter is…

Not everyone is interested in being on the show. That includes Etienne, Atz Lee’s son. He has, on occasion, been on the show, including the episode where he helped his dad build the hunting cabin. This was the period of time where Atz Lee was trying to rehab his body after the fall that broke dozens of bones in his body and nearly killed him. The fall was at Otter Cove Resort, back in 2015. Atz Lee needed a lot of help and it could be safely assumed that Etienne was there to help out his dad.

Etienne has popped up every once in a while since then. But, he is never introduced. He is usually just doing his thing, helping on the homestead. What do we know about Atz Lee’s son?

Etienne is Atz Lee’s son from a previous relationship. He and Jane do not have any biological children of their own, but they have a modern, blended family. Late spring, Etienne turned 18. That very same week, Etienne graduated from high school. Atz Lee posted a tribute to his recently graduated son that may have irked teachers around the world. Nonetheless, Atz Lee is never afraid to speak his own truth.

“My son @et_trillin_12managed to turn 18 and graduate high school all in the same week, amazing. I honestly don’t have much faith in the public school system and personally could care less if he graduated or not. I’m more concerned with him setting goals and gaining the self love and confidence one obtains upon completion of a dream. So damn proud, the world is a better place with you in it. Dream big, work hard and never stop believing in your self. Much love.”

Alaska: TLF fans, what do you think of Jane and Atz Lee’s kids not featured on the show? Share your comments and be sure to come back to TV Shows Ace for the latest news. Alaska: The Last Frontier Season 9 should start about October 6 on Discovery.