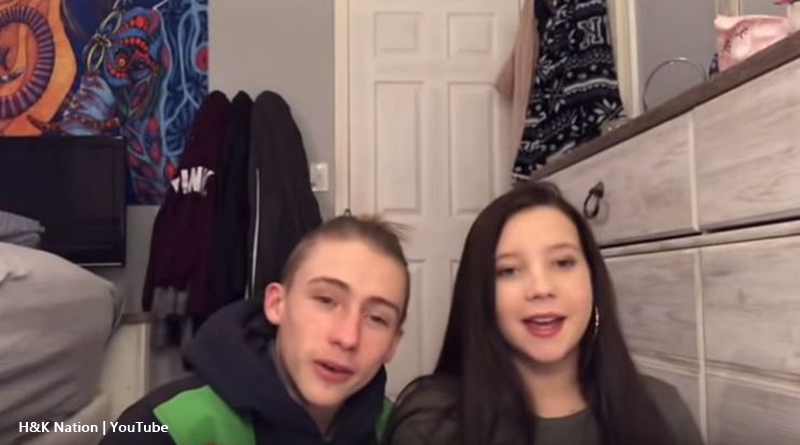 Unexpected fans saw newbies Hailey Marie Tomlinson and Matthew Blevins. Both just 16-years old when they met, they have a baby, but not all is well. Fans are a bit shocked that Hailey’s mom brought Matthew into their house where he ‘wet his noodle,’ resulting in an unsurprising pregnancy. The couple brags about how they made love before even kissing. But, this is a much bigger hot mess than first expected.

Unexpected fans learn the bios of Hailey and Matthew

The backstory of this couple is that they met in 2017 and in a way, Matthew catfished her by persistently sending her direct messages. He’d been in some kind of lockup, had issues with his parents and moved in with Hailey with her mom’s say-so. They didn’t only wet the whistle but mom caught them in the act. Many fans think it’s shocking that she only feels “a little” responsible for her daughter’s pregnancy.

While Unexpected fans toss some blame on the mom, others on social media freakout at the immaturity of these two kids. As Twitter user, @richhomiebla pointed out, “This couple (Hailey and Matthew) needs to stop being like they 5 years old or something.” That’s a very good point, seeing they already have their baby who arrived four months ago. Only 16 when they met, it seems they behaved like irresponsible teens, only a lot younger than 16. But, it looks like maturity’s got a long way to go, especially with Matthew.

The hot mess of a BFF and Matthew cheating on Hailey

Starcasm dug around and found the Unexpected cast member’s YouTube, where conflicting videos show something of a hot mess. According to Hailey, she acted out for Matthew but Matthew does nothing for the baby. Well, apparently he did buy some diapers, once. In fact, according to recent posts on YouTube, Matthew never sees his child. Worse than that, it seems he made off with Hailey’s bestie. Unexpectedly, she’s also a Hailey. And, at first, Hailey said she was good with the other Hailey (who we will call Bestie to prevent confusion), dating her baby daddy.

Or, maybe not. Because she followed that up with allegations that ‘Bestie’ breaks up partners all the time. Apparently, when Hailey initially said she was okay with that she was just “faking” it. So, we have one very hurt and steaming hot, sad little girl. As for Matthew, it looks like he’s not concerned in the slightest about cheating on the mom of his baby. ‘Bestie’ and Matthew made a detour from Unexpected, and get heavily into PDA on their Instagrams.

Now 17, one would expect maybe an inkling of maturity and responsibility wormed its way into Mathews’s head. But it appears not. However, just maybe ‘Bestie’ might have a little idea of that, even with questionable ethics. According to Starcasm, on her Instagram, “[Bestie’s] been talking a lot about having children with Matthew, but she has stated that she wants to wait.

And now, thanks to Starcasm, fans of Unexpected can find the various hot PDA posts on Instagram. Matthew and ‘Bestie’ have private accounts, so you will need to request to follow. But they also have a joint account. However, Hailey’s account is open to follow. She posts a lot of photos of her lovely little baby girl. So, you can just click on this embed below to get to the original Hailey. Before your brain explodes, you should know that original Hailey also runs an Instagram account all about the baby.  Both girls have the names, Hailey Marie. The TLC Hailey the original is Tomlinson and the new Hailey in Matthew’s life is Tilford.

In summary, it looks like Hailey’s relatively hate-free right now and most people have a downer on her mother. Now that the truth’s out about the ‘Bestie’ and Matthew, no doubt loads of people will go and look for them to hate on them now.

What do you think about Matthew and Hailey’s unexpected hot mess situation? While Hailey blames her bestie for Matthew’s cheating, it seems Matthew should really grow up. Sometimes, TLC kicks up the drama and hype, but it looks like Hailey and Matthew managed that all by themselves. Sound off your thoughts in the comments below.