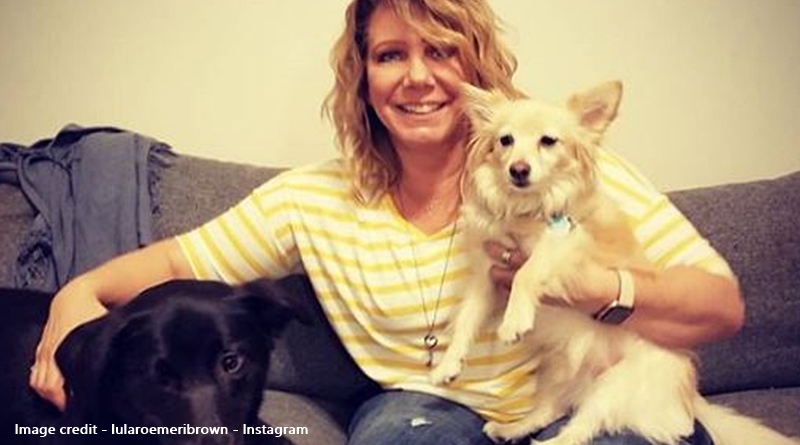 Sister Wives fans heard some rather shocking news this week. Radar Online broke the news that Meri’s left Flagstaff. The slant of the story is that she left for good. It details much of the history of Kody and Meri and her unhappiness. They noted that she put her rental up for sale and suggested she abandoned the family, seemingly forever. It came after she captioned an IG Story showing a video driving out of Flagstaff, Arizona with her dog. “Saying goodbye to Flagstaff” was part of the caption. The post also read “It’s not a goodbye, it’s a see you later.”

Well, the inference that Meri’s chucked it all in and gone away forever emerges as you read the rest of the story. That’s not quite how TV Shows Ace interprets the facts. It seems the dog was saying to “goodbye to Flagstaff,” not Meri. However, there may be some truth in the fact her rental home is up for sale. So, let’s debunk the rumor that Meri Brown left Flagstaff, seemingly forever.

Sister Wives – Meri and the little pooch Mosby in Flagstaff

Fans of the TLC show know that Meri Brown totally loves little Mosby. Remember back in the last season, we saw Mariah leaving Flagstaff? Meri cuddled the little dog so much. During the show, we saw Meri with Mariah’s pup in her arms during the family circle of prayer. Even saying goodbye, to Mariah, Meri was so reluctant to put the little pet down. It’s obvious the little fellow finds a special place in Meri’s heart.

Recently, Meri stayed with Mariah in Chicago and got to see the little doggie again. Thrilled, Meri posted up a photo of her and Mosby, both smiling widely as he perched on her knee. She tagged her post with “Chicago” and captioned it: “Oh Mosby, you are perfect!!” The next thing we saw was a report by Popculture, that revealed in the title, ‘Sister Wives’ Star Meri Brown Reveals She’s Not Living Alone After Return From Chicago.” It turns out that Meri took Mosby back to Flagstaff with her.

Rumors arise from interpretation in the tabloids

It was just a story that she took Mosby to Flagstaff. During the week, we saw Meri out and about with Mosby running through the fields and forest and generally having a blast. In fact, the sister wife also shared a photo just yesterday. It shows her and Mosby outdoors and her caption read in part, “this little guy has loved his little summer vacay in Flagstaff, walks every day, exploring, and well, me. Yes, he loves me! Lol! I will miss him when he goes home!!”

So, it shouldn’t rock our boat too much to see her sharing a story with her doggie in the car and the caption, “Saying goodbye to Flagstaff – It’s a see ya later.” Actually, it shows clearly how rumors spread through the interpretation by the tabloids. Radar Online wrote, “[The sister wives star] revealed she is saying goodbye to the town the family moved to in August.” Not dissing any other tabloid here – just passionate about accurate reporting. This post obviously relates to Meri saying goodbye to her beloved Mosby who returns home to Mariah. Nowhere, is there the slightest indication that Meri Brown herself is saying ‘goodbye to Flagstaff, seemingly forever.

So sad that our time together is coming to an end. I tell ya, this little guy has loved his little summer vacay in Flagstaff, walks every day, exploring, and well, me. Yes he loves me! Lol! I will miss him when he goes home!! 💙🐕💙🐕💙🐕 #LivingMyWhy #BecauseICan #LifeFulfilled #LifeIsAnAdventure #LuLaRoeRetailer #FlagstaffFashion #LuLaRoeForLife #LuLaRoeValentina #LLRDenim #MosbyTheDog #SummerVacation #DogGrandma #DogsOfInstagram

Radar Online revealed that they knew that the rental home Meri lives in is for sale. However, does that mean Meri put it up for sale? Their headline said, “MERI BROWN PUTS HOUSE FOR SALE.” It’s not earthshattering news that a rented home may be listed for sale.  Everyone who rents a home fears that eventually a new buyer will pick up the property. That means looking around for new digs. Usually, that is indicated in the rental lease.

So, we don’t know that Meri actually put the house up for sale. Just a thought – usually, the owner puts their rental up for sale. Not the tenant. After all, the Sister Wives family might be already building, or plan to start building on their new Flagstaff properties. If Meri took a long lease, it may not be worth extending it again. So, yes, we think it’s a stretch to take a goodbye by a dog and the fact a rental’s on the market as literal truth that Meri’s seemingly abandoning the family. But, we will acknowledge that the facts include Meri’s home may be listed for sale. Plus, Meri posted a photo that said goodbye. Beyond that, speculation and rumors loom.

What do you think about these rumors that suggested Meri Brown left Flagstaff, seemingly forever? Do you think some facts were slanted to make a headline catcher? Sound off your thoughts in the comments below.

Remember to check back with TV Shows Ace often for more news about Meri Brown and Sister Wives.