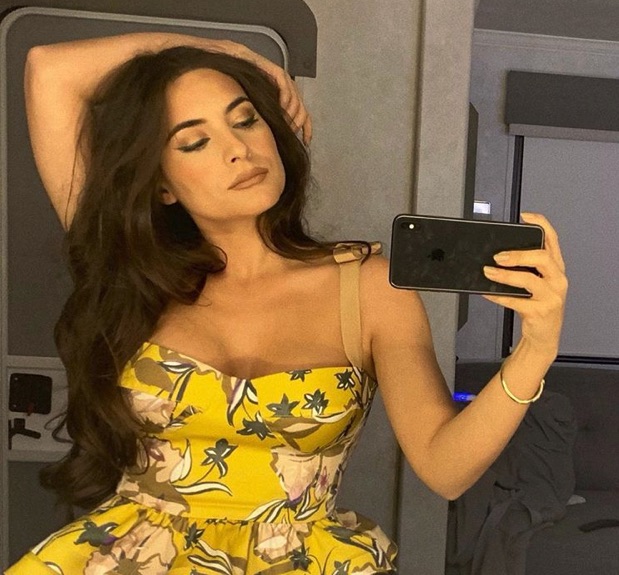 Dynasty’s second Cristal, Ana Brenda Contreras, spoke exclusively to the Spanish language version of People on Saturday, breaking her silence on why she left the CW show. Did she reveal any dirt that the CW president Mark Pedowitz didn’t share at TCA?

Why did Cristal 2 leave? Ana Brenda Contreras explained to the Spanish-language People why she had to depart the CW show after only one season playing Cristal Jennings. Translated from the original Spanish, she explained her surprising departure from her first English-speaking role was due to her health. On one hand, she was grateful to the CW and she enjoyed working with her Dynasty castmates. On the other hand, the work and stress, including being based in Atlanta caused her personal issues and was all overwhelming to her health. She will be keeping in touch with the creatives in charge of the CW show.

“It was a decision we made together with the producers and it cost me a lot of work. I had been dragging a lot of workload, stress and personal things that made my stay in Atlanta very difficult and had an impact on my health. I take everything beautiful with my character and my castmates. I am too grateful to CW and we are on the best terms. In fact I keep in touch with the creatives and I don’t doubt that we will work again.”

She also explained that she enjoyed her first English-language acting experience. She felt she broke the ice and looks forward to acting in more English-language productions. But for now, she needs to take care of her health and then “comply with publicity commitments.” She doesn’t have any upcoming acting plans, but is looking for a “good story” and wants to do more work in her native Mexico.

It is too bad that this interview was not available earlier. On Sunday, while speaking at TCA, CW President Mark Pedowitz conceded that although there were a lot of comings and goings to the CW reboot, “there’s no dirt to be found.” Even Dynasty’s executive producer, Josh Schwartz, who seems to be preoccupied with his latest shiny toy, the CW’s Nancy Drew, insisted Sunday that the many Dynasty departures were unrelated to each other.

One thing is for sure, Dynasty is still making boatloads of money. According to By The Numbers, former CBS head Les Moonves had something interesting to say. He pointed out that “We own 100 percent of the show, and we’ve already licensed it to Netflix in 188 countries. … So this means Dynasty is profitable before it even hits the air.”

Dynasty fans, are you still reeling from the shock of Ana Brenda Contreras leaving the show? Share your comments and be sure to check back to TV Shows Ace for the latest on Dynasty. Dynasty Season 3 returns to The CW on Friday, October 11 at 9/8 CT.