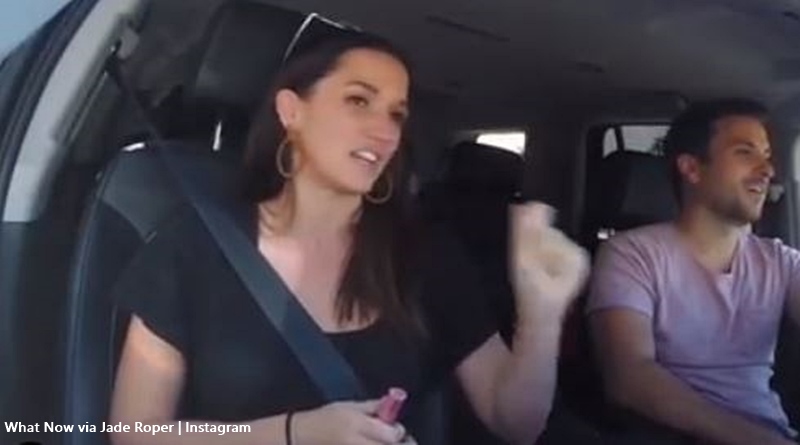 Jade Roper Tolbert fans predicted a few weeks back that her and Tanner’s baby could run another month yet. However, following the reported pregnancy salad to help it along, she thinks the baby might be on the way. Taking to her Instagram Stories tonight she hinted about it and also promised her followers updates.

As fans know, Jade already has her little girl Emmy. In mid-July, commenting on her 36-week-old pregnancy, Jade wrote, “Officially the most pregnant I’ve ever been! Yesterday marked 36 weeks exactly, which was the point where I gave birth to Emmy. Excited to spend however much time I have left with this little guy in my belly. 🤗❤️”

However, TV Shows Ace reported that fans thought it would be at least a full 40-week term for her. We noted, “Fans concluded that Emmy looked to have dropped already. Plus, the new baby still rides very high. Certainly, the comparison’s easy to make. Because of that, many fans think Jade Roper Tolbert will see a full 40-week journey before birth. That means another month to go yet if they’re correct.”

Happy Birthday, @chrisbharrison! We feel so honored to know you as a friend and to have you be a part of our ever growing love story. Also, I think it’s appropriate and fitting that if I go into labor on this very special day, we name our son Harrison in your honor (sorry, @tanner.tolbert 😆)!

Fans of The Bachelor and Bachelor in Paradise couple heard that Ashley Iaconetti, her BFF bought her a pregnancy salad. At the time, Roper felt the magical meal had not worked for her. That is until many hours later when she posted to her Instagram Stories, a little image with the words, “You guys… I think the salad may be working.” She added that she’s “feeling funky.”

Well, it seems there’s more myth and legend to the pregnancy salad, but at this stage of pregnancy, Jade could feel “funky” at any time. Anyway, about 14 hours passed and then another message came via Instagram Stories about the baby situation. This time, things were a little clearer for fans of Jade Roper Tolbert.

Hints the baby’s on its way

Jade Roper’s second Instagram said, “Okay, I don’t want to keep you all in suspense. Ha Ha. No baby yet. I feel my body is being a tease.” She added, “I’ll jump on here later on Stories and fill you guys in. Thanks for all the good luck and wishes. I love you all.” Well, according to What To Expect, and if you’ve given birth yourself, symptoms like “cramps and increased back pain and loose-feeling joints,” are all signs the moment’s beginning. Certainly, these could be described as “funky.”

Mind you, Parents.com reminds us that in late pregnancy mothers often experience false labor. “Prodromal labor, sometimes called false labor, is a common occurrence for women in the last few weeks of pregnancy,” they wrote. So, what happens is you may feel some contractions, but it stops after a while and leaves you feeling down. Maybe that’s what Jade’s going through right now? However, her posts bring a good hint that something’s happening and the baby might come at any time now.

Remember to check back with TV Shows Ace for more news about Tanner and Jade Roper Tolbert’s baby.

Update: Not long after that, Tanner Tolbert went to his Snapchat Story and shared that Jade’s water just broke! She is in the bathtub and the baby is coming soon.