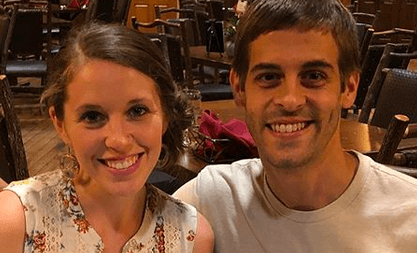 Last weekend, Jill Duggar and Derick Dillard celebrated their 5-year wedding anniversary. The couple got married on June 21, 2014. They now have two sons, Israel and Samuel.

Earlier this week, Jill shared an Instagram post featuring the highlights of their anniversary celebration. She shared several pictures and wrote about the weekend. The couple spent the weekend in Branson, Missouri. In her caption, Jill describes the weekend. She writes, “We stayed at a bed and breakfast, then hung out at Silver Dollar City part of the time and saw our friends @southernraisedbandmusic perform.”

Then, Jill continues, “Derick surprised me with an amazing dinner (& lovely view!) @thekeetercenter at #collegeoftheozarks (highly recommend! Such a neat place!) #hardworku @sierrasaffle. Thanks @datingdivas for the fun games and ideas! If you don’t know about them, check them out!! They’ve got lots of fun, clean, date/marriage tips and ideas! We ended our trip with a fun afternoon at the movies watching #toystory4 lol”. Finally, Jill thanks her in-laws for caring for Israel and Samuel for the weekend. They are lucky to have that kind of help around.

What did Duggar fans have to say about Kama Sutra?

In one of Jill’s photos, a book called Kama Sutra is featured. This is a guide to lovemaking. Alongside the book is a game scorecard with the title “Bedroom Edition”. Because of the Duggar family’s Christian values, their fan base was concerned about Jill’s post.

One fan commented, “Really shocked Jill. You’ve always been a massive role model for me. Right from when I was first converted. This has really bummed me out”.

Another fan wrote, “Whoa. I don’t consider myself to be a prude, but I also don’t think we need to know about your bedroom games. Waaaaaay TMI, Jill.” Then, one added, “I’m open minded and no way religious but I think a bedroom game should be kept private and not posted on social media… I don’t know anyone that would post that sort of personal details on instagram”.

One of the observant fans noticed that there is a Bible in the picture. The fan wrote, “Kama Sutra and the Bible all in one shot. No modesty here”.

Jill’s explanation about the book

Because of all the backlash Jill received for the post, she wanted to offer an explanation. On Saturday, she updated the caption of her anniversary post. She directed fans to it via her Instagram story. The addition to the caption reads,

“Note: We are not recommending the Kama Sutra. We believe marriage is ordained by God and husbands and wives should filter everything they read and hear together through the lense of the Bible and not practice anything unbiblical. The little book pictured is a modern, smaller, cleaner, edited version that doesn’t focus on spiritual aspects, homosexual, or other extramarital relationships, and again, we don’t take everything in there either as the truth. It is always good to be aware and careful of what we allow into our minds, hearts and marriages. We’ve not read the actual Kama Sutra and only promote biblical marriage (i.e. between a man and woman who are married). We just wanted to clarify since there has been a lot of discussion after this post.“

In the past, Jill has been fairly open about her marriage and what happens in the bedroom. She wrote a blog post about keeping her marriage alive. Some of the content in this blog post was shocking to Duggar fans.

What do you think of Jill’s explanation about the bedroom game? Did you see a problem with Jill’s original post? Let us know in the comments below.

For more updates about the Duggar family and Counting On, check TV Shows Ace soon.

Why Is ‘Ya Boy Kongming!’ The Biggest Flop Of Anime Season?
Joy-Anna & Austin Forsyth Dating Timeline Does NOT Add Up?
Jinger Vuolo Goes Back To Her Roots
Tyga Takes Strange Dig At Kylie Jenner And Her Family?
Audrey Roloff Maintained Incredible Hair Amid 3 Pregnancies, How?