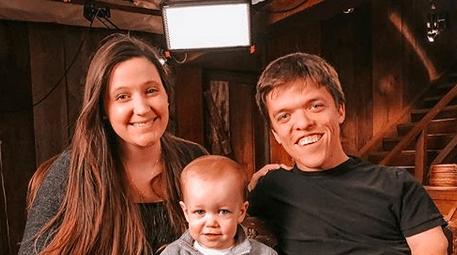 Zach and Tori Roloff of Little People, Big World got married in July 2015. They had their first son, Jackson, in May 2017. He will be two years old later this month.

Now, the married couple is talking about adding to their small family. In an interview with Us Weekly, they opened up about their hopes of expanding their family. In this interview, it became obvious that the family will be growing soon enough. Zach and Tori shared that they hope to have a lot of children.

When the two were interviewed by Us Weekly, they were very open and honest. Zach said, “We want a family. I would love four or five kids. I want a little pack. Right now, we’re just kind of [like], if it happens, it happens.”

They also mentioned that they’re leaving this in “God’s hands” and said, “It’s just on God’s timing and just whenever.” It sounds like their family could get bigger pretty soon.

From what we’ve seen, Zach and Tori are great parents to their young son. They are often sharing sweet updates about him on social media, which fans love to see. On many of their posts, fans comment about how well the couple is raising Jackson.

Though the couple has decided on their own that they want a larger family, it’s likely that this encouragement keeps them positive about their abilities to parent. They shared about their son’s growth in the interview, saying, “He’s talking more, he’s mimicking more [and] he can understand more. … He’s just doing everything a little bit better lately.”

Jackson was born with dwarfism like his father. Back when the couple found out about this, which was when Tori was 34 weeks pregnant, they explained that they would love the child no matter what. They seem to have a positive outlook on parenting and are proving that they will be able to parent their future children just as well.

Zach said, “You have to encourage a dwarf child a little more because it will take them five steps to do what others can do in two. But I knew, dwarf or not, I was going to parent my child with the mentality that not everyone gets a trophy. You have to earn it.”

He then added, “Whatever he wants to do, we’re going to find a way to help him do it. That’s our job in life now.”

Are you excited to see Zach and Tori’s family grow? When do you think Jackson will become a big brother? Share your thoughts in the comments below!

Watch Little People, Big World on TLC on Tuesdays at 9PM. For more updates about your favorite TLC shows, check back on TV Shows Ace!