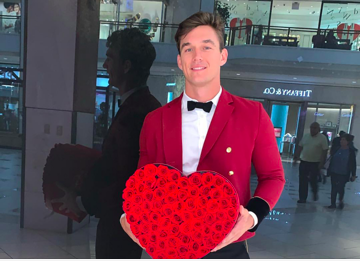 As Hannah B began filming her season in New England this week, viewers have started to learn more about her suitors. Spoilers are out about Hannah’s one on one date with Mr. Tyler Cameron a 26-year-old hailing from Jupiter, FL.  So who is this dashing man and does he deserve the affection of Alabama Hannah? He’s certainly handsome, while that generally goes without saying, this season has an unusual crop of men.  Well done Hannah, based upon looks she made a good pick.  He also loves his mama, she features in a number of his Facebook photos.  So far, so good.

Tyler’s Instagram is set to private, but his headline reads more like a CV than a social media bio.  Where is the pithy “live, laugh, love” quote or obligatory bible quote?  He lists his alma maters, Wake Forest and Florida Atlantic University.  He claims that he is a graduate of Wake Forest where Cameron played back-up quarterback for two years and holds an MBA from Florida Atlantic where he played wideout for another two years.  Seems suspicious but perhaps, he saved up his last to years of athletic eligibility for a rainy day.  He also claims to be a “custom home builder,” read: construction worker.  Call it what it is Tyler! There is no shame in holding a job.  Also, he lists representation from three different modeling agencies.  How on earth does he have the time to do it all?

Upon further investigation, his modeling statistics can be found on his Next Miami profile; he is 6’2″, has a 33″ waist and eyes like deep blue curacao.  The profile also shows a number of his modeling shots. In most of the photos, he is topless and making a vacant expression that makes him appear as though he just passed gas. His patented, “I just farted” look has nothing on Zoolander’s blue steel. Even if he does look silly in his pictures, there is no denying that he is hot.

Tyler’s Instagram may not reflect a biblical reference, but his Facebook certainly does.  After all, one cannot become a contestant on the Bachelor franchise without praising our Lord and savior and his good news. Fear not dear reader; Tyler is not a heathen.  He quotes Galatians 5:13, “Through love, serve one another.”  I give him major credit for his choice, it is less typical and proves that perhaps he has even read the good book himself.  It is also just a generally lovely message.  This also bodes well for Hannah who claims Jesus is her everything.  It would not work for her with someone who did not have the same beliefs, at least not in the long term.  Perhaps their faith will give this relationship a bit of real gravity.  It would be a refreshing change to see in the series.

See how far our favorite god-fearing football-player makes it on Hannah’s season.  The season of The Bachelorette airs in May on ABC.