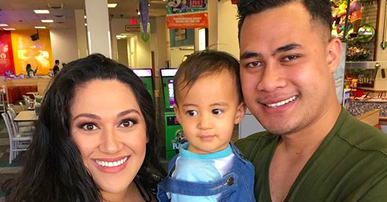 Kalani Faagata of 90 Day Fiancé is currently pregnant with her second child. She and Asuelu Pulaa had their first child together back in January 2018. His name is Oliver and he just celebrated his first birthday.

Now, the couple is expecting their second child together. They first confirmed this on the TLC show. They shared a cute announcement, which features Oliver, on Instagram. In this post, Kalani Faagata also shared a meaningful message with her followers.

I had antepartum depression while pregnant with Oliver, to the point that I wanted to kill myself. Once the baby came, I had postpartum depression: I wasn’t bonding with him, I cried all the time and wanted to die again. Regardless of my mental state, I had to go back to work when Oliver was 3 months. I’d sob on my way to work, cry in the bathroom on breaks, then cry once I got home out of guilt for leaving my baby. I felt like I was almost out of it when we began filming, and then found out about the next baby shortly after. I know my truth, I know the sequence of events and that’s enough for me. Thank you to all of the moms who have reached out with such thoughtful, uplifting messages. There are too many moms in this world who compete or try to drag each other down, and it’s nonsense. We need to support each other. Thank you to my sister and my mom for helping me during and after my pregnancy with Oliver—I wouldn’t have survived without you both. And, to the women who are struggling to get pregnant and/or have suffered miscarriages, my heart breaks for you. Please know that I was concerned about the well-being of my son because of my mental state when I’m pregnant, not that I was ungrateful to be pregnant. Wishing you all the very best, and that all of the positivity and light you spread to others gets sent right back to you! Merry Christmas and Happy Holidays, from my little family to y’all. ❤️💚

Why is Kalani Faagata struggling with this pregnancy?

Recently, Kalani Faagata posted a video on Instagram. In the caption, she explains what is going on with her pregnancy. She says,

“I haven’t done many pregnancy updates because I haven’t been doing very well both mentally and physically. I’m so thankful that my mom’s in town for a while so I can have a break and finally start nesting. I’m fortunate to have such strong women in my life who help me when I’m struggling. Thank you, thank you, thank you.”

I haven’t done many pregnancy updates because I haven’t been doing very well both mentally and physically. I’m so thankful that my mom’s in town for a while so I can have a break and finally start nesting. I’m fortunate to have such strong women in my life who help me when I’m struggling. Thank you, thank you, thank you @kolinilynne @maemae2my5boys 👸🏽👸🏻👸🏽❤️

Part of the reason this pregnancy is rough on Kalani Faagata could be because her son is so young. We aren’t sure exactly when she is due, but it’s probably sometime in late spring or early summer.

Her son just turned one in January so the two will be close in age. She didn’t have much time to adjust to being a mom. On this topic, she says, “I wanted to wait until my son was old enough so that I could be excited about it, and now I just feel even more overwhelmed than I already did.”

Even though Kalani Faagata is struggling, she wants fans to know that she isn’t ungrateful for this pregnancy. In a post, she said, “Please know that I was concerned about the well-being of my son because of my mental state when I’m pregnant.”

It seems like Asuelu Pulaa is looking forward to welcoming the new little one into the world. On 90 Day Fiancé, he shared, “Kalani, she’s mad, because I am very happy to make a baby. I come from a big family. I have lots of siblings. So it’s like a good feeling for me to have a son. And, my son have another sibling.”

Were the 90 Day Fiancé stars expecting this pregnancy?

It turns out that Kalani Faagata got pregnant unintentionally. Since this baby was not planned, it makes even more sense why she is struggling with it. She wasn’t prepared to have another child and is still having a hard time adjusting to this pregnancy.

In December, on the show, Kalani Faagata told her family about the pregnancy. In this same episode, she shared some insight about this unplanned pregnancy. She said, “Because I’m breastfeeding, Asuelu and I don’t really have many options for birth control, and Asuelu doesn’t really like using condoms because they’re for ‘slut people.’”

Though the couple wasn’t planning to expand their family, it happened. Hopefully, they will be able to handle it more easily soon so that they can prepare for their new bundle of joy!

For more updates about 90 Day Fiancé, check back on TV Shows Ace!