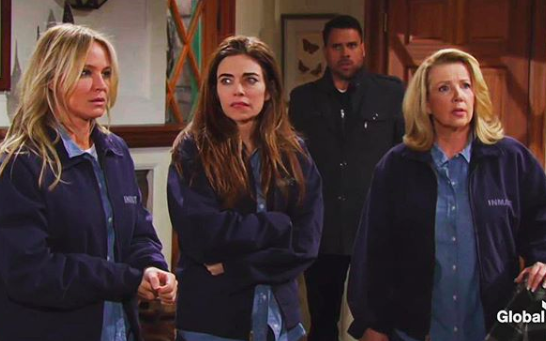 Last week The Young and the Restless was cut short by programming for March Madness.  When viewers last saw what happened in Genoa City, it seemed like the women might catch a break.  That is until JT cut the electricity at the cabin and threatened the women at gunpoint.  At that moment it seemed as though the Newman women might not make it out safely.  Lola had gone under the knife and will soon awaken from anesthesia to learn the truth about what Kyle did because he “loves” her.  The writing staff at Y&R certainly know how to write a cliffhanger.  So what happens next?

Think J.T. could still be alive? See if Nick and Billy can solve the mystery this week on #YR!

JT is an excellent bad guy and he looks good doing it to boot.  By cutting the electricity and causing a gas leak, he made it necessary to call in first responders. This plan would send the women back to prison and allow him to escape.  Except that isn’t exactly what happens.  JT also falls unconscious, trapping him squarely in the web constructed by Victor, Billy, and Nick.  Now that they have JT in custody one would think that it is the end of suffering for the Newman women and it is except for Victoria.

Here's the sneak peek clip #YR fans unlocked in our Facebook live this morning! 👏 In case you missed our fun game of trivia, check it out with the link in bio.

Victoria has now come nose to nose with an abuser who she thought she had killed in self-defense.  At this point, he is back to torturing her. Victoria is being to fall apart, and she isn’t the only one who has concerns.  Billy is very concerned about Victoria especially after a conversation where she notes that she doesn’t recognize him and asks if the men disfigured him somehow.  Billy answers that JT has always been that way.  Will Victoria ever be ok with JT back in the picture?

Old Favorites are Back

This is not a drill.  Shemar Moore is back! He alongside Mishael Moryn and Victoria Rowell make a return to Genoa City.  The actors are returning to pay tribute to their costar and friend Kristoff St.John.  This appearance will be the beginning of many come back presentations made in his honor.  It should be noted that the return of these characters will not be permanent.  They will have a brief one or two day arc.

These aren’t the only surprise appearances this week.  Eileen Davidson also returns to Genoa City after leaving for what viewers thought was forever.  It only seems appropriate because it looks like there is a coup in the works at Jabot.  While the men of Genoa City came through for the Newman women, that was a rare occurrence.  They should know better than to cross the women, and Ashley Abbott is just the women to put them in their place.  What will happen when she returns?

Watch your old favorites this week on Y&R.  Watch The Young and the Restlessweekdays on CBS.