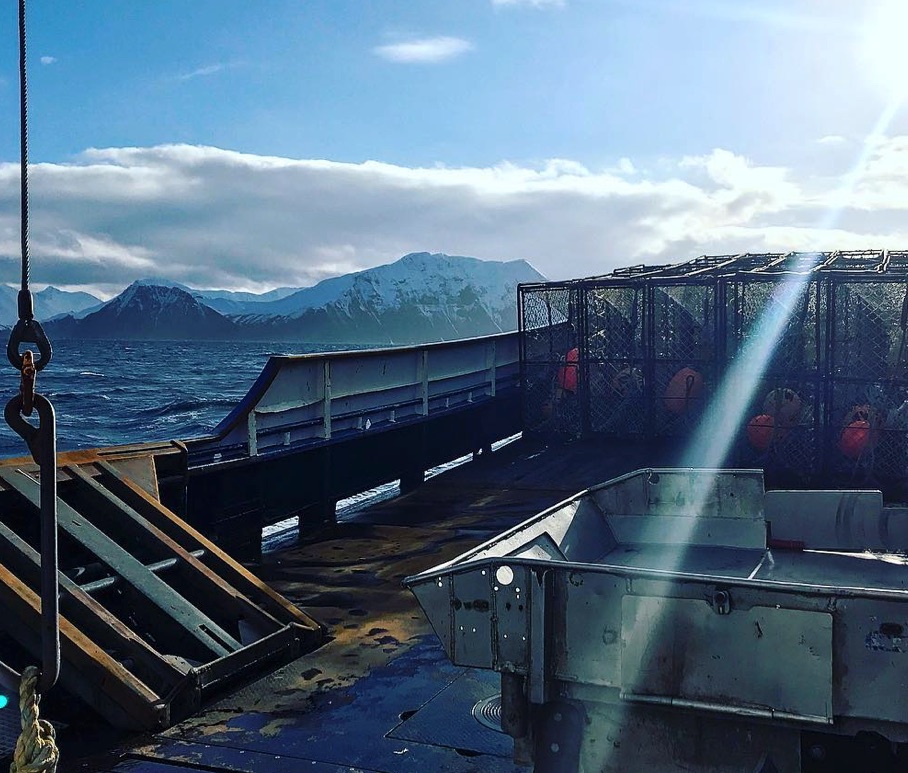 The Deadliest Catch 2019 will be bringing in a brand new boat captain, Steve “Harley” Davidson. Right now, Discovery is not revealing much about him, except that his boat is the second biggest, next to Captain Keith Colburn’s Wizard, and that the two captains are not exactly the best of friends. Who is Steve “Harley” Davidson?

Who is Southern Wind captain Steve “Harley” Davidson? Thanks to the magic of podcasts, we have a bit of a preview of who this captain is, how he got started in crab fishing, and perhaps a preview of what to expect on the Deadliest Catch 2019. Thanks to a fan, we even have a photo of the boat, with Captain Harley in front of it. He does look great in front of that boat.

Starting At the Beginning Of Steve’s Journey to Captain

Speaking to Mark Caylor on the podcast Galley Stories in February 2018, Steve “Harley” Davidson shared his journey into eventually becoming the captain of the second biggest crab boat on the Bering Sea, the mighty Southern Wind. Steve Davidson was born in Los Angeles, the oldest of 5 kids. When he was 10, the family moved to Washington. He was the oldest, with a second brother who was 15 years younger than him, and three sisters sandwiched in-between. His folks opened up a family billiard, so his first job was hanging at the pool hall, working.

After high school, he was involved with sports but didn’t know what to do with his life. He got a junior college scholarship thanks to football, but he didn’t like any of this. Instead, he went west, to Bellingham, Washington. This is in the late 1970s when he first got into fishing.

Is He Steve Davidson Or Harley Davidson?

He wound up fishing because there was no one to hang out with and have a beer. Everyone was working! He started up fishing in the fall in Puget Sound, outside of Bellingham. Harley’s foray into the world of fishing was as a cook. His double duty included working the drum, the reel and fair lead. This all works like a sewing machine bobbin or a like a spinner reel, you always have to feed it up.

This is when he got his nickname “Harley.” Three of the four guys on the boat were called “Steve.” So, the captain called him “Harley,” because of his last name Davidson, another was “Fox,” as that was his last name, and the third was actually called Steve. This nickname stuck with him until he was in Alaska. For the longest time, Captain Steve could tell when people met him: when he was a crab fisherman, he was known as “Steve,” when he was a fisherman, he was known as “Harley.” It sounds like Discovery is resurrecting his “Harley” nickname, based on the advertising. Captain Steve will answer to either name.

In 1977, when he was 21, he got married and a couple of years later, they had a premature baby. At the time, the medical bills were piling up for his baby daughter. It was expensive doing carpentry work, taking college classes and now with a premie daughter. This was November 1980. By January 1981, he was in Alaska, on the Monarch, Bairdi fishing, which were only .58 cents a pound.

He got there by hanging on the docks. He saw the guys across the docks with Corvettes, who clearly had money and he learned that they were the crabbers. Harley signed up, and they called when there was an opening. Steve was not that skillful and it was harder than it looked. It was cold– really cold–, especially for his feet. Crab fishing was tough. He cut up the meat in his fingers, and he still has the scars. Not only was it tough, but there was a lot of bullying going on the boats. Eventually, he figured it out, but he doesn’t know where those two bullies are now!

Then, his marriage didn’t go so well, so he moved back home. He fished in Puget Sound. Soon, his marriage dissolved. He had given all of his money to UW for his premie daughter. Anyone who wonders about his daughter now, she is fine and has a masters and is a school psychologist. Steve is clearly proud of her.

Then, he went on a couple of crab boats that were not making any money. In 1983-1984, he went on a 42-foot boat from Bellingham to Kodiak. This was in mid-February, around his birthday. The owner of the boat was an older Portuguese guy, who didn’t know what he was doing, and they didn’t make any money. He also joined the Golden Dawn, a totally gold boat with black trim. Once, that boat bumped up on a beach, and the boat sucked up a bunch of black sand and filled 3 feet of sand in the tanks. It was hard work removing that sand. He even fished on a troller, and that was too slow. You would put the nets out, watch a movie and then another movie, and nothing happened. This was not his cup of tea. Things were pretty tough going.

In the mid-80s, he went off to fish salmon in Chignik Bay. He couldn’t find a decent job there, and hitched a ride to Negro Head, but couldn’t get off of the boat, and went to the lagoon area. Steve kept walking, meeting guys and looking for a place to work. He got a job working the net. Steve also became famous for wearing fancy bright rain gear.

Then he was on a boat fishing salmon and herring around Prince William Sound, with Jason Alexander for many years. Harley found it great working for him. He was still doing crab during this time. Got in American Star premium crab boats and he got his Coast Guard license then. He left Jason around 1995-1996, then he was the tender captain for  American Star. He had a good crew on the 158-long boat, and even his daughter and nephew joined him fishing. But, in 1999, the boat went out cod fishing, during a time he was not working. There was a fire that had to do with the rain gear along with an engine fire. The crew and dog were helicoptered off, and the destroyed boat landed on the beach.

Like fellow Deadliest Catch captain, Wild Bill Wichrowski, Harley was also on the Cape Caution. Steve contends that they had had some good seasons, but the Cape Caution has had a history of some pretty bad luck. Steve didn’t move much for a while, because it was hard to leave a job where you are second in charge. But one piece of advice he learned was to stick with Norwegians. He isn’t Norwegian himself, but he is married to a Norwegian girl, and he considers that pretty good. He hasn’t revealed if his boat bites the head off of a herring at the beginning of the season, like the Norwegian Hansens, but we will have to see.

Now he is the Captain of the Southern Wind. Harley admits he’s been scared many times. He says he has been scared so many times that the voice in your head says “someone is going to die today.” The captain is always looking out for something that will “bite you.” He proudly states that he has never had a death on board, but he always scared. He admits that’s how he’s “wired.”

Captain Harley’s advice? “You gotta watch out. You got a family?” He went on to say, “You got any alcohol or drug problems? Maybe IRS problems? Because you better be ready when you go out.”  Harley is serious about crab fishing. He is proud of the young guys that he has working for him, as a lot of the older guys are retiring. He believes in getting out there and getting it done quickly. Harley figures that when you go with quotas, you figure how you are going to reach your goal, keep moving and just get out of there and drop off the crab.

He admits that over the years, he has worked with a “bunch of a*******,” but has had a pretty good life, and is happy and healthy. Most of all, he feels you can walk around in your bright rain gear and can hold your head up high. This is because crab fishing gives you pride. This is a job that you are able to do, and something that very few can do.

Do you feel you know Captain Steve Harley Davidson better now? Do you find his story as compelling as the stories of other crew and captains? Are you ready to watch him compete against the other Deadliest Catch captains? Please share your comments and predictions below. The Deadliest Catch Season 15 premieres on April 9, 9:00 p.m., ET/PT on Discovery.