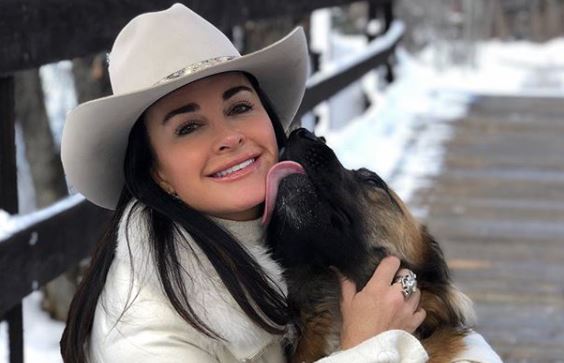 RHOBH fans are pretty much sick and tired of the “puppygate” storyline of the show this season. However, a Twitter poll about Kyle Richards seems very popular. Copied in on it, Kyle Richards responded to the poll by denying she orchestrated the drama with Teddi Mellencamp.

If you missed any of the drama on Bravo’s Real Housewives of Beverly Hills, here’s a short recap of the “puppygate” hysteria. The season started out showing Dorit Kemsley adopting a dog from Vanderpump Dogs.  Later, she said it bit and nipped the kids and hubby so she found another home for it. Little Lucy Apple Juicy apparently failed to appeal to the new owners and ended up back in a shelter. Of course, Lisa Vanderpump’s (LVP) rescue dog center was notified and the scandal began. Oh, yes since then another dog got mentioned.

A flurry of texts began by all and sundry in the RHOBH cast with Teddi Mellencamp leading the way, drawing in Kyle Richards, Lisa’s husband, Dorit, the whole bag of them. Accusations against LVP leaking the story and an employee’s involvement rocketed. Anyway, the show’s made for drama and this season seems to deliver that big time. Fans wonder who started it all off, who orchestrated it, and more. On Twitter, many fans think Kyle did orchestrate the ‘puppygate’ scandal.

People are saying Kyle and Teddi “orchestrated” things! Did they? #RHOBH 💎 @BravoTV @Andy

The poll on Twitter, which still runs asks if Kyle and Teddi ‘”orchestrated” things!” Judging from the comments, many fans believe this to be true. Obviously, other divergent beliefs arise, with some suggesting Lisa Rinna played her part, and others suggesting Teddi went and started it by herself. Others just wish the whole thing would go away and they don’t care, pointing out it’s like watching a bunch of teens in a cat fight.

Fans of RHOBH who think Kyle and Teddi were behind it all, explained why they felt that way. Some things they mentioned were:

I did not orchestrate anything. I didn’t even know who the dog was . Never saw her or heard about her before that day https://t.co/ufNC9Lk7PB

In response to the poll, Kyle reacted strongly, saying, “I did not orchestrate anything. I didn’t even know who the dog was. Never saw her or heard about her before that day.”

Again, the anti-Kyle sentiments came up from those who think she did pursue “puppygate,” at least after it all blew up. One RHOBH commenter said, “U may not have heard about her b4 but have since made it your mission 2 be involved. You don’t know how to stay neutral between friends issues. U threw one friend aside who was grieving & chose 2 be a part of a gang up over social media to a friend of many years. Not a good look.”

What do you think about the poll asking if people think Kyle Richards orchestrated “puppygate” with Teddi Mellencamp? Do you think she did? Or, do you think Kyle just hopped on a bus that already started rolling against LVP? Sound off your thoughts in the comments below.

Remember to check in with TV Shows Ace often for more news about RHOBH.