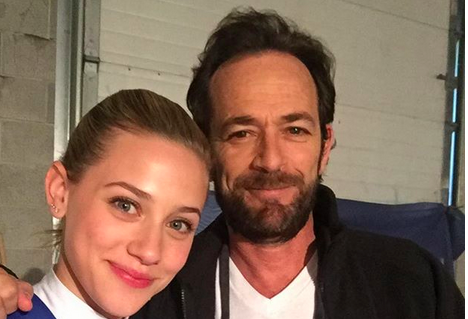 Since the tragic death of Luke Perry on March 4, the filming of Riverdale has been on a break. They put the show on pause as the cast mourns this loss. The show began filming again recently.

Luke Perry plays the role of Archie’s dad, Fred Andrews, on the show. Just under a week before Luke Perry passed away, he suffered a stroke at his home in Sherman Oaks, California. At the time of his death, he was under observation in the hospital.

Now, the executive producer of Riverdale, Roberto Aguirre-Sacasa, has spoken about the show addressing Luke Perry’s death. In an interview with Entertainment Tonight, he said,

“You know, honestly, we are I think all still in shock and are all still processing and grieving. We know that we have to address it in some way, but we’re giving ourselves a little bit of time and space before we figure out the best way to honor him.”

From what Roberto Aguirre-Sacasa has said, it sounds like the cast and crew of the show are still working through this tragedy. They know that they are going to address his death eventually.

When Luke Perry first suffered from the stroke, several of his co-stars posted about him on social media. They all seemed to be very concerned. It shows how close all of the stars are to one another. We’re sure they have been deeply impacted by his death.

On the day following Luke Perry’s stroke, Lili Reinhart shared a selfie and a nice message about her co-star. In her post, she said, “Thinking of you, Luke. And praying for your safe recovery.”

Thinking of you, Luke. And praying for your safe recovery.

Another co-star, Cole Sprouse, also posted a photo of the two of them and said, “Love you bud”.

Because of how Luke Perry’s death has affected his co-stars, it makes sense that the show was paused temporarily. It must have been a big adjustment from filming with Luke Perry to him suddenly not being there.

Do you have any ideas about how exactly Riverdale will address Luke Perry’s death? Be sure to watch Riverdale on CW on Wednesdays at 8/7c. For more Riverdale news, check back soon!