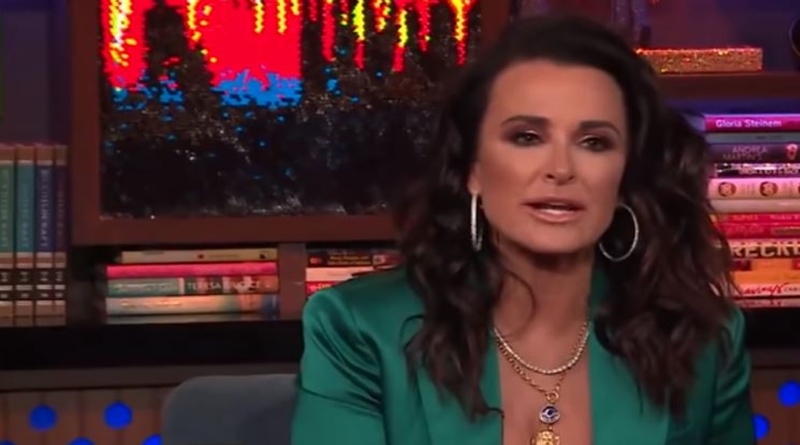 RHOBH‘s current season has plenty of drama on-screen, and now some of that spills into the daily life of Kyle Richards and her family. Actually, Instagram went down for much of the day on March 13. However, Kyle got onto it to slam a troll asking her daughter, Sophia Umansky, about a University entrance bribe. In fact, it came after the Operation Varsity Blues investigation resulted in the arrest of several high-profile entertainment celebs.

Fans of the RHOBH show know that the same subject got discussed by Kyle on Watch What Happens Live with Andy Cohen. US Weekly reminds us that the subject came up because Kyle moves in the same circles as some of those arrested. Notably, her friend, When Calls the Heart star, Lori Loughlin went into custody. Obviously, this sparked some curiosity. During the show, a fan asked if Kyle’s daughter Sophia had anyone in her “circle” who faced this type of issue.

In reply, Kyle said that they know lots of “people in that circle.” Shocked, Kyle added, “Everyone’s talking about it today, you know, in our world and our circle.” Actually, it seems that Kyle never knew that sort of thing existed. “Maybe I’m naive. I didn’t even know that existed,” she concluded.

On her Instagram, Kyle posted a story that showed an image of the troll asking about a bribe. According to the story, the troll wrote, “Did your parents bribe and buy your way into Gw just like all your neighbors back home did?” They added, “You do seem incredibly stupid.” Well, Sophia answered by at least not lowering herself to the same level of communication as the troll.

In reply, Sophia posted, “I actually graduated high school on the Dean’s list.” She added that she “worked really hard to get into a good school.  Thank you for your concern tho, sweetie.” Well, that was a great reply and the best kind to shut down trolls. RHOBH‘s Kyle, so proud of her daughter, overlaid the clip with, “Yesss Sophia,” and a handclap emoji.

Kyle Richards slams back at the troll

Not content to just leave it with Sophia to defend herself, Kyle waded in with her own comment about trolls, saying, “Some people are unbelievable.” Yes, it seems they definitely are. After all, Sophia is only 18-years -old and is a freshman at George Washington University, Washington, D.C.

Remember to stay in touch with TV Shows Ace for more news about RHOBH.