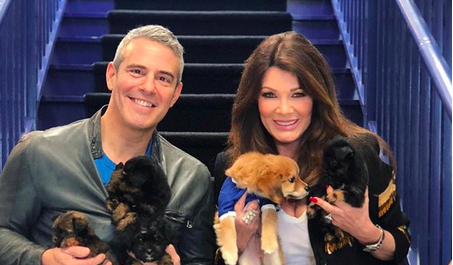 In recent days, there have been claims about Andy Cohen wanting to boot Lisa Vanderpump off Real Housewives of Beverly Hills. Rumors have circulated saying that he is intentionally trying to get her off the show.

Now, he’s coming out to address these claims. Let’s take a look at where this all began.

What started the drama between Lisa Vanderpump and Andy Cohen?

It all begins with Teddi Mellencamp posting a picture on Instagram. Kyle Richards and NeNe Leakes are also in the photo, which is the main reason for the drama.

Unfortunately there’s no crossover in tonight’s episode, but was fun running into @neneleakes while in the Bahamas! Make sure to tune into #rhobh on @bravotv…

A post shared by Teddi Mellencamp Arroyave (@teddimellencamp) on Mar 5, 2019 at 9:18am PST

The three were all in the Bahamas on the Real Housewives of Beverly Hills cast vacation at the time. Fans immediately claimed that Andy Cohen had paid for NeNe Leakes to go on this trip.

How has Andy Cohen responded to these claims?

On Twitter, Andy Cohen decided to talk about the claims about booting Lisa Vanderpump off the show. He probably just got fed up with hearing about them.

The tweet that Andy Cohen sent out said, “None of this is true. Had no clue nene was in Bahamas or that she had a beef with lvp until she said it on my show.”

In addition, he has said that he is not doing anything to try to get Lisa Vanderpump off the show. He seems to be telling the truth, but we never know what’s going to happen next.

Based on his statement, it seems like all of those claims were false. It doesn’t look like Lisa Vanderpump will be leaving Real Housewives of Beverly Hills.

Could this affect Lisa Vanderpump and her shows?

In addition to being on Real Housewives of Beverly Hills, Lisa Vanderpump is a star on her own show, Vanderpump Rules. Vanderpump Rules is currently on its 7th season, which debuted in December 2018.

An amazing party tonight celebrating the premiere of #VanderpumpRules Season 7! We are back tomorrow on @bravotv so stick with us! 🎉

Though she is dealing with all kinds of drama, it doesn’t seem like she will leave any of her shows anytime soon. If she does, she has plenty of other ways to make money and keep herself busy! It will likely all blow over very soon.

There is some speculation that she will be skipping the Real Housewives of Beverly Hills reunion. The rest of the cast is assuming that she won’t be there, but only time will tell.

What do you think of Andy Cohen’s response to these rumors? Do you believe him? Watch Real Housewives of Beverly Hills on Bravo on Tuesdays at 9 PM EST!

Be sure to check back for more reality TV updates from TV Shows Ace!