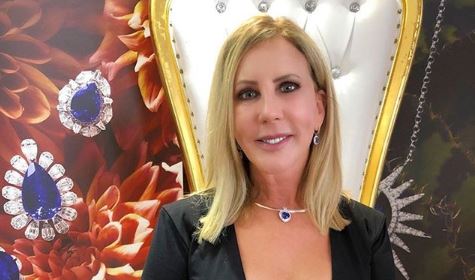 Vicki Gunvalson and her daughter Briana Culberson have graced the Bravo television channel since 2006. Long-time fans of the hit reality show Real Housewives of Orange County have literally watched Briana grow up before their eyes.

A fan favorite, over the last 13 years Briana has had her share of health issues, gotten married, had two children, fought with her mom over Brooks Ayers and moved across the country from her (sometimes) overbearing mother. (Briana, her husband, and two sons live in North Carolina while mom Vicki lives in California.)

In January, Briana revealed her dramatic 40-pound weight loss on Instagram. She credits the controversial Keto diet in helping her lose the weight and get her lupus under control. The Keto diet has its celebrity critics (Jillian Michaels, for one, and RHOC star Tamra Judge) and those who swear by it (Briana, Al Roker, Halle Berry, etc.)

Just wanted to share this incredible photo of Briana and @ryan_culberson. Together they have lost over 85 lbs since last summer. She feels better and is healthier than she has been in a long time. Missing her so much across the miles, but couldn’t be more proud of both of them. #ketodiet #proudmom #missmygirl #ca-nc

The recent photo of Briana also includes her husband, Ryan Culberson. It touts their combined weight loss of 85-pounds.

Vicki – and viewers – were in for a surprise in 2011 when her daughter Briana eloped. Briana’s boyfriend (now husband) Ryan had only returned home from his military duties in Afghanistan a week before their impromptu Vegas wedding.

It was revealed shortly after the elopement announcement that Briana was also pregnant. While Vicki Gunvalson missed the Vegas wedding, she threw the couple a lavish OC wedding.

Briana and Ryan now have two sons and have lived in various places all around the country. In 2017, the couple decided to put roots down in North Carolina. They purchased a ranch-style home set on 25-acres. Yes, Vicki has her own room in the house.

Briana has been quite open on the show about her health problems. They started back in 2010 when she was first diagnosed with tumors on her thyroid and in her neck. She has the tumors removed in 2011 and again in 2015. The biopsy results were benign, meaning the tumors weren’t cancerous.

Season 11 of the original Housewives franchise focused on Briana’s health struggles, including a ride in an ambulance after having breathing difficulty.  Briana (and Vicky) struggled to find a diagnosis for her health problems. In the season finale, Briana revealed that she finally had a diagnosis – Lupus.

Briana shared on her Instagram that her weight loss thanks to the Keto diet has helped reduce her Lupus flare-ups. She seems happier and healthier than she has ever been. Many fans will be happy to hear this news, as she is considered the best thing about the show.