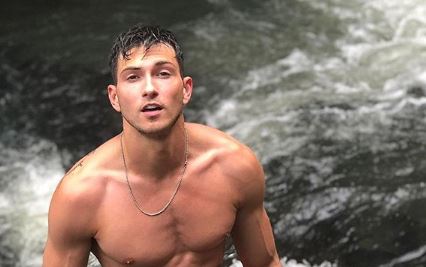 February sweeps are winding down. That usually means the explosive storylines are wrapping but this week on Days of Our Lives, things are just starting to heat up!

Last week, Ben Weston (Robert Scott Wilson) saved Ciara (Victoria Konefal) from the cabin fire his sister Jordan (Chrishell Stause Hartley) set. It wasn’t Ciara’s first fire in that cabin. Ciara was kidnapped and held hostage with Tripp (Lucas Adams) in the same cabin last year. The cabin was set on fire and the culprit was never revealed, until now.

Thanks to Tripp discovering something in Ciara’s jewelry box (the lighter, perhaps?), he figures out that Claire (Olivia Rose Keegan) set the fire. This is problematic because Claire is not only Ciara’s niece and Hope’s granddaughter; she has also been dating Tripp after his break-up with Ciara. A break-up that was orchestrated by Claire and Ben.

Once Tripp figures out the truth, he confronts Claire in Ciara’s hospital room and Claire confesses. We know the actress who plays Claire is leaving sometime this Spring; how does this twist play into her eventual exit?

You’ll have to stay tuned to Days of Our Lives on NBC to find out how the Bradys react Claire to being a pyromaniac.

Salem was shaken when Jack Deveraux (Matthew Ashford) came back from the dead and then threw his hat in the race for Mayor.

This week, Jennifer (Melissa Reeves) moderates a debate between Jack, Abe (James Reynolds) and Melinda (Laura Kai Chen.) Jack recently discovered, thanks to his son J.J. (Casey Moss) that not only does Melinda know that J.J.’s girlfriend, Haley (Thia Megia) is an illegal immigrant, she’s also her sister!

Thanks to Eve’s (Kassie De Pavia) encouragement, Jack uses this information that his son told him in confidence to his advantage at the debate.

J.J. and Jennifer are aghast at Jack’s actions.  It is yet another brick in the wall Eve is creating between Jack and his family.

Ben Breaks Up with Ciara

Despite being proven innocent in Ciara’s kidnapping and his sister in jail, Ben still worries that he is a danger to Ciara.

As the week begins, Hope (Kristian Alfonso) apologizes to Ben for thinking he was behind the kidnapping. Ben accepts her apology, but he still feels guilty about not protecting Ciara from his sister. Because of this, they are going to have their issues.

Ben ends up breaking up with Ciara for her own good. Perhaps he’ll change his mind once he finds out who was behind the earlier cabin fire.

Long-time soap fans know that no one ever dies on soap operas. So, when Nicole Walker (Arianne Zucker) was “killed” in a fire last year, seasoned viewers knew the character would pop back up eventually. Well, “eventually” turns out to be April 25th, just in time for May sweeps. Will her memory be wiped out like Jack’s?

Find out on Days of Our Lives weekdays on NBC.