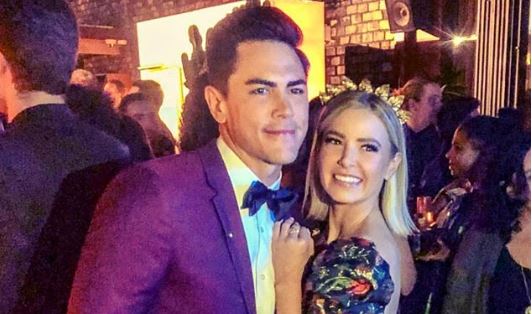 Vanderpump Rules’ stars Ariana Madix and Tom Sandoval recently purchased a home in LA together. Fans of the show know the couple has been house hunting for the last two seasons.

The modern farmhouse has five bedrooms, including a master bedroom with vaulted ceilings. One of the 5.5 bathrooms is a master bath featuring a soak tub and dual sinks. The couple that primps together stays together? Odds are Tom has already called dibs on BOTH of the walk-in closets for himself.

Fireplaces, a “Great Room” and a Pool

Their new home was built in 2018. It also features several fireplaces and a “Great Room” that opens up to the in-ground pool and backyard.  The pool features a 6-inch waterfall and an infinity-edge spa. Will Tom and Tom (Schwartz) move Spa Day at Tom and Ariana’s new house?

Three’s Company or a Crowd

Tom and Ariana have been living in the same apartment in West Hollywood that Tom has lived in since he moved to LA over 10 years ago. According to Tom, he stayed in that apartment for all of this time because it was rent-controlled and in a great location.

The 2-bedroom, 2-bath apartment has seen a revolving door of roommates. The other Tom, Jax Taylor and ex-girlfriend Kristen Doute have all shared the apartment with Tom. In fact, it was in that apartment where Kristen and Jax had sex while Tom was sleeping in the other room.

Another Great and Successful “Tequila Tuesday”! Thank u everyone for coming and kickin it tonight @surrules ! #meditation #pumprules

In Season 7, Ariana’s brother Jeremy Madix moved into the small apartment. He got a job at SUR and dated Billie Lee that season, but he hasn’t been on Season 7 much. There’s no word if Ariana’s brother will be moving into his sister’s new house.

What’s Next for the Couple of Five Years?

Buying a home together is a huge step for any couple. It is usually followed by marriage and/or kids. Tom has expressed interest in both of those things. However, Ariana is reluctant to ever have children OR get married.

So far, Tom has outwardly supported her decision while not-so-secretly telling the cameras that he hopes she changes her mind. Early in this season, he told his friends that never having children was a relationship deal-breaker for him. Once the episode aired, he walked the deal-breaker comment back, but we’ll see what happens.

Tom is busy focusing on his TomTom bar that he co-owns with the other Tom and Lisa Vanderpump. This bar is something that could change his life even though they only own a small percentage.

Tune into Vanderpump Rules Monday nights on Bravo to watch all the drama go down in West L.A.

Fans To Meri Brown: Admit It Was An Affair Not Catfishing
Abbie Duggar Flaunts Baby Bump In Sundress: When Is She Due?
Jennifer Duggar Corrects Mom Michelle In Awkward Conversation
‘Welcome To Plathville’ Fans Give Olivia Plath High Praise, Why?
‘Below Deck’: Hannah Ferrier Could Return On Spinoff