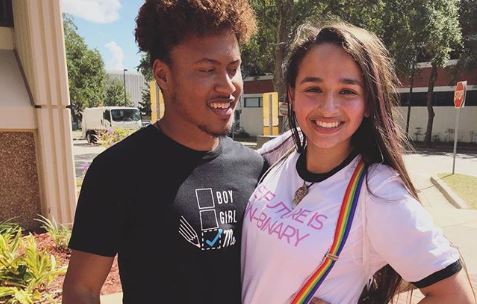 I Am Jazz fans saw Jazz’s new boyfriend in this week’s episode and since then fans wonder if Ahmir Steward is trans. In fact, lots of them took to Google and his social accounts to try and find out. In a recent Instagram post that showed a baby, one fan asked him straight out. Actually, while short on words, he did clarify his trans status for fans of the TLC show.

In the episode where viewers finally caught a bit of her new boyfriend Ahmir, we saw Jazz’s dad setting some ground rules for dating. In the end, her mom wanted her to take it very slowly due to her recent bottom surgery. Meanwhile, her Dad Gregg agreed he could visit but no closed doors and no staying overnight rules came out. During the episode, Jazz took to her Twitter to ask fans what they thought of Ahmir. Fans agreed that so far nobody knows him well enough to form an opinion.

However, fans did note that they felt some caution was needed. Actually, their fears for Jazz centered around the fact that he’s not in college. Also, he’s unemployed and relying on Jazz for motivation. But, one thing that’s obvious is how curious fans are about Ahmir. Thanks to an Instagram post by Jazz, a little bit about him emerges. The status of his own gender identity confuses some fans of the show.

Ahead of the recent episode, Jazz went to Instagram and posted a photo of Ahmir. Fans reacted, saying they looked cute together and they wished them well. In her caption, she tagged Ahmir on his handle @ahmirsteward, thanking him for “going on this journey with me.” On that account, not many posts appear, but they do date back to one where he looks very much as he does in Jazz’s post. In that post, he mentioned he’s “been embraced by a new community. That’s what happens when you’re finally honest about who you are; you find others like you.”

That post made some fans wonder if he identifies with a transgender identity. In another post showing him eating out with Jazz, other fans wished them the best. However, it was the post by Jazz that really got them head-scratching. In that one, he wore a T-shirt with the words “Boy,” “Girl,” and Me. The “Me” line came with a tick next to it. Obviously, some fans assumed he’s trans from that.

Ahmir clarifies on trans status on a new post

Well, now fans need not wonder anymore, as he clarified his status on a newer post. He captioned it with no words. Actually, he seems rather reticent and wastes no words where he need not use them.

From the comments, it seems the little kid in the image may be him. However, that’s not important. One follower asked him if he’s trans. In a one word answer, Ahmir replied saying, “Nope.”

So, now you know. Ahmir Steward knows his gender identity and he’s not trans. However, judging from some of his Instagram Stories, he sure believes in non-gender discrimination. In fact, some advice he dishes out shows a maturity about the LGBTQ community. Also, Jazz Jennings and Ahmir met at a Philadelphia Trans Health Conference.

What do you think about Jazz’s boyfriend Ahmir clarifying his trans status? Do you find his attitude to the LGBTQ community refreshing? Remember to check back with TV Shows Ace often to find out more news about I Am Jazz.