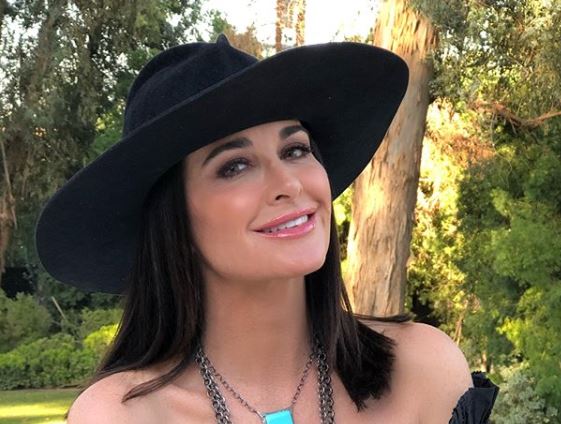 In a recent episode of Watch What Happens Live, Kyle Richards confided to host Andy Cohen that she hasn’t spoken to Lisa Vanderpump or Lisa’s husband Ken in months! These two used to be pretty close.

The exact nature of the current feud between the ladies hasn’t been revealed yet. Season 9 of RHOBH starts Tuesday, February 12 and fans will have to tune in to see what goes down between the former close friends.

As previously reported, rumors have swirled for months that Lisa Vanderpump had a falling out with all her castmates. It was even reported that she allegedly refused to film with any of them. That will be awkward to watch.  Can’t wait!

Kyle Richards and Lisa Vanderpump were fast friends and allies on RHOBH. However, Kyle didn’t appreciate that Lisa was also close to Brandi Glanville, especially after Brandi said some harsh things to Kyle’s sister Kim Richards.

In the season airing in 2014, there was a petty issue about who packed some magazines for the girl’s trip. These had negative stories about Kyle and her husband, Mauricio in them. Lisa Vanderpump tried to blame it on Brandi, but Brandi was adamant that Lisa was the one who purposely packed the magazines.

Another bone of contention between the ladies was Lisa’s belief that Kyle made everything about Kyle. This came to a head during the Season 8 reunion. Lisa said she always had to be the one to calm down Kyle’s anxiety and worries.

Did the feud start in Season 4?

While Kyle and Lisa were seemingly close friends for the last few seasons of RHOBH, were they really? If we go back to Season 4, we’ll see how Brandi claimed that Lisa told her that she wanted to “take down” Kyle.

Lisa, of course, denied saying it entirely. Why would Brandi lie? Brandi didn’t particularly get along with Kyle either. If Lisa did say that, then perhaps all these years of pretending to be friendly with Kyle was just a rouse. Viewers may never know for sure.

Housewife Lisa Will Never Reconcile With

From the promo for Season 9, viewers know that Brandi will be back for at least one episode. This is because of her friendship with newcomer Denise Richards. Tune in to Season 9 of Real Housewives of Beverly Hills on Bravo to see if Brandi and Lisa cross paths.