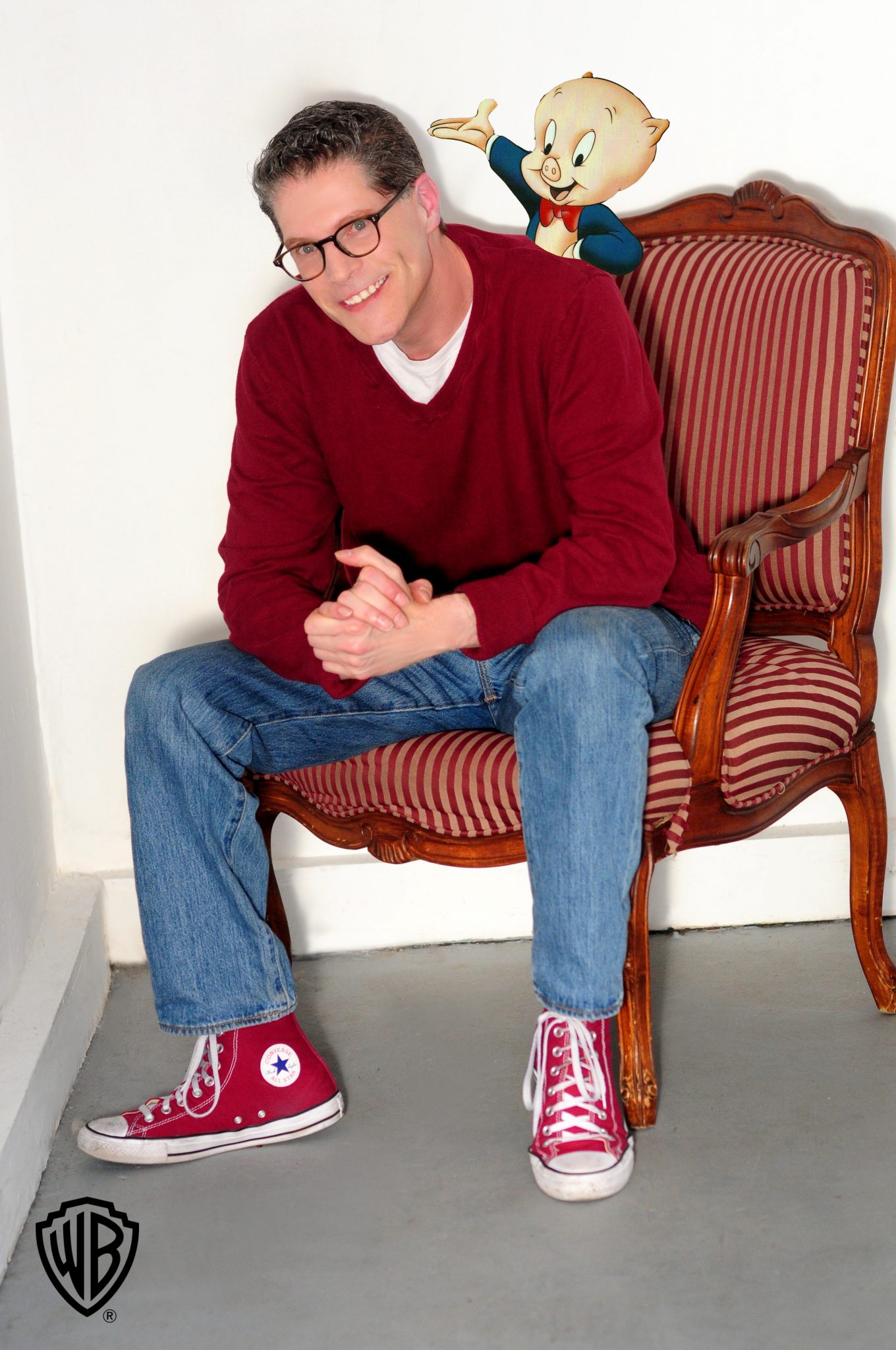 Bob Bergen is known for being the voice of several famous cartoon characters over the years. He has been the voice of WB/Looney Tunes’ Porky Pig for 28 years. TV Shows Ace got the chance to get an exclusive interview with Bob Bergen and find out how he got started and even what he is up to now.

How did you get started in doing voices? How old were you when you started in this industry?

I was the class clown who got into a lot of trouble doing what I now do for a living. I would mimic teachers and actually responded like Porky Pig when asked a question, even though my voice hadn’t changed and I really didn’t sound that much like him. But at an early age I figured out the formula to his stutter, so I knew the character’s personality well, even though vocally I still sounded like a kid.

I knew I was vocally versatile at an early age, but I really didn’t know there was even an industry called voiceover until my Dad moved the family to LA when I was 14. This move was not for me, he just happened to take a new job in the city where cartoons are voiced.

I also realized that it’s voice acting, which meant I needed to hone my acting skills. I studied voiceover for 4 solid years with every vo coach LA had to offer. I spent 2 years at an acting conservatory, and 3 years studying improv. I got my first cartoon a week out of high school. It then took another 5 years of hit or miss auditioning before I was able to quit my last day job, a tour guide at Universal Studios, and work as a full-time voice actor.

Is there anything exciting you are working on that you can share at this time?

I am so excited about Looney Tunes Cartoons. Warner Bros. is producing over 200 shorts reminiscent of the golden era of the classic Looney Tunes. In my almost 30 years voicing these characters, the character design, storyboards, and scripts are the most Termite Terrace/Clampett I’ve ever had the pleasure to voice. Pure Looney Tunes fans will know my reference. For others, just Google! 😉

I’m also in the process of writing a book called Porky Dishes, which is full of stories and anecdotes on my career, how I booked the pig, re-booked the pig…over and over, survival jobs, teaching animation vo, etc. Plus it will be jam-packed with my favorite pork recipes!!!! I love bacon! No judging!

And I have a slew of other things on the horizon but these days we sign NDAs for almost each and every gig. So, unfortunately, I cannot discuss a bunch of other fun things.

Are there any jobs you wish you had been picked for but didn’t get?

Really interesting question. Ya know, I don’t think so. I teach animation voiceover, and one of the things I teach my students is to audition and then forget. If you are fortunate to be in the game you will be auditioning for dozens of characters and jobs a year. Booking is a fortunate circumstance. An actor’s real job is to audition. I have such respect and admiration for my fellow voiceover actors, I have really never thought twice about what I have not booked.

Now, I do remember auditioning for and not booking Boo Boo in the Yogi Bear movie a few years ago, later reading that Justin Timberlake booked it. My first thought was, “Really????? Justin Timberlake???!!” I saw the movie and thought, “Damn, he’s GOOD!” This was not just an example of stunt casting. He did an awesome job, both his acting and his vocal skills. Justin, Porky Pig is a fan!

There are many amongst my peers who resent celebrities booking the leads in animated features. And I cannot argue that it can get frustrating. But this is show “business.” As a business person I do appreciate the strategy of studio execs that a celeb might bring better box office odds. And when a celebrity does it well, like Timberlake, or Ellen Degeneres in Finding Nemo/Dora, well, that’s what it’s all about. That perfect marriage of story and character acting.

But I have been very fortunate to have provided voices in many animated features over the years. I’m what you would call a “utility player” in animated features, joined by the likes of Jess Harnell, Laraine Newman, Mindy Sterling, Fred Fred Tatasciore, etc. Those of us who can voice dozens of characters in a single scene, which most well known celebrities cannot do. That said, I would indeed love to be side by side with Tom Hanks on an animated feature. Jussayin.

Can you pick a favorite voice you have done over the years?

Well, Porky is number one. I got into the business to play him. But there have been several over the years that have a special place in my heart. Luke Skywalker in various Star Wars projects, Bucky the Squirrel in The Emperor’s New Groove and Wembly Fraggle in the animated version of Fraggle Rock.

How has this job changed over the years for you?

Well, the industry has changed. But the job of acting has stayed the same since the days of Shakespeare. An actor’s job is to be truthful under imaginary circumstances. (I cannot take credit for that phrase. That belongs to the great Sanford Meisner) So be it a cartoon, sitcom, theater, or commercial, the audience has to believe the actor.

The animation industry has changed greatly. When I started out there were 3 networks airing Saturday morning cartoons and a handful of syndicated cartoons. Today there are 24/7 networks devoted to animation. When I started out Disney might have released an animated feature once every 5-7 years. Today, every major motion picture studio has a thriving animation department. Add to this games and web animated programming, and there have never been more opportunities for the animation voice actor than today.

Don’t miss out on wherever Bob Bergen ends up next! You can also always follow his Instagram.